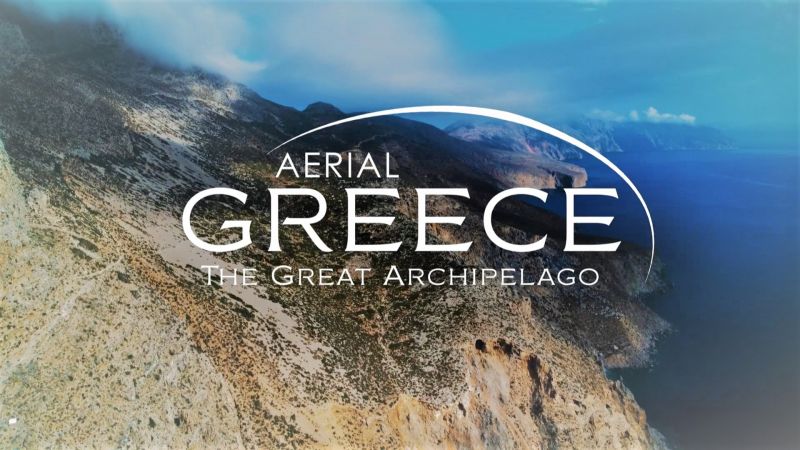 Aerial Greece episode 1 – The Great Archipelago: Southeast of mainland Greece, a ring of over 200 islands dot the Aegean Sea: the Cyclades, which translates to “circular islands.” According to Greek myth, they were made by the vengeful sea god Poseidon, but to residents and tourists, this large archipelago brings wonder and astonishing views.

Soar above landscapes carved by human civilization and by elemental forces above and beneath the Earth. Then discover what makes each island unique as we explore their mythic and historic pasts and the remarkable people who live and work here today.

The Cyclades are an island group in the Aegean Sea, southeast of mainland Greece and a former administrative prefecture of Greece. They are one of the island groups which constitute the Aegean archipelago. The name refers to the islands around the sacred island of Delos. The largest island of the Cyclades is Naxos, however the most populated one is Syros.

The Cyclades includes about 220 islands, the major ones being Amorgos, Anafi, Andros, Antiparos, Delos, Ios, Kea, Kimolos, Kythnos, Milos, Mykonos, Naxos, Paros, Folegandros, Serifos, Sifnos, Sikinos, Syros, Tinos, and Thira or Santoríni. There are also many minor islands including Donousa, Eschati, Gyaros, Irakleia, Koufonisia, Makronisos, Rineia, and Schoinousa. The name “Cyclades” refers to the islands forming a circle (“circular islands”) around the sacred island of Delos. Most of the smaller islands are uninhabited.

Ermoupoli on Syros is the chief town and administrative center of the former prefecture.

The islands are peaks of a submerged mountainous terrain, with the exception of two volcanic islands, Milos and Santorini. The climate is generally dry and mild, but with the exception of Naxos the soil is not very fertile; agricultural produce includes wine, fruit, wheat, olive oil, and tobacco. Lower temperatures are registered in higher elevations and these areas do not usually see wintry weather.

Poseidon was one of the Twelve Olympians in ancient Greek religion and myth, god of the sea, storms, earthquakes and horses. In pre-Olympian Bronze Age Greece, he was venerated as a chief deity at Pylos and Thebes. He had also the cult title “earth shaker”. In the myths of isolated Arcadia he is related with Demeter and Persephone and he was venerated as a horse, however it seems that he was originally a god of the waters. He is often regarded as the tamer or father of horses, and with a strike of his trident, he created springs which are related with the word horse. His Roman equivalent is Neptune.

Poseidon was protector of seafarers, and of many Hellenic cities and colonies. Homer and Hesiod suggest that Poseidon became lord of the sea following the defeat of his father Cronus, when the world was divided by lot among his three sons; Zeus was given the sky, Hades the underworld, and Poseidon the sea, with the Earth and Mount Olympus belonging to all three.

In Homer’s Iliad, Poseidon supports the Greeks against the Trojans during the Trojan War and in the Odyssey, during the sea-voyage from Troy back home to Ithaca, the Greek hero Odysseus provokes Poseidon’s fury by blinding his son, the Cyclops Polyphemus, resulting in Poseidon punishing him with storms, the complete loss of his ship and companions, and a ten-year delay. Poseidon is also the subject of a Homeric hymn. In Plato’s Timaeus and Critias, the legendary island of Atlantis was Poseidon’s domain.

Aerial Greece episode 1 - The Great Archipelago: Southeast of mainland Greece, a ring of over 200 islands dot the Aegean Sea