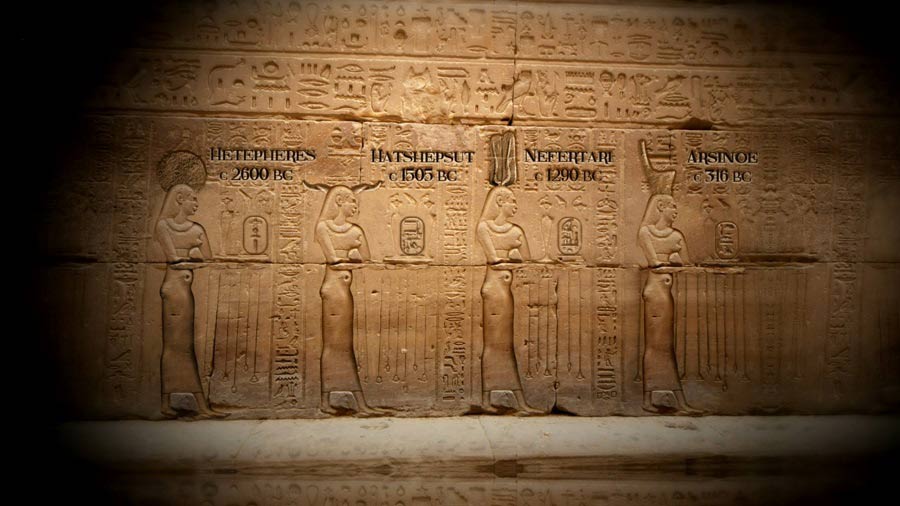 Egypt’s Lost Queens: Professor Joann Fletcher explores what it was like to be a woman of power in ancient Egypt. Through a wealth of spectacular buildings, personal artefacts and amazing tombs, Joann brings to life four of ancient Egypt’s most powerful female rulers and discovers the remarkable influence wielded by women, whose power and freedom was unique in the ancient world.

Throughout Egypt’s history, women held the title of pharaoh no fewer than 15 times, and many other women played key roles in running the state and shaping every aspect of life. Joann Fletcher puts these influential women back at the heart of our understanding, revealing the other half of ancient Egypt.

Ancient Egypt, a rich history that lasted for over 6,000 years. The lives and deaths of its leading characters still fascinate us to this day and when we visit museums featuring exhibitions on this period of our history we typically encounter monumental statues of monumental men but where exactly are all the women of ancient Egypt?

The most famous of these women is of course Cleopatra The Great but most of the images we have of her are in coin form and even at that, what about all the female leaders who came before her? In this film we see historian, Joann Fletcher take it upon herself to dig a little deeper and discover who these women were.

It might come to you as a surprise but the ancient Egyptians were unique in their attitude to sexual equality with women holding the title of ‘Pharaoh’ no fewer than 18 times while there were also female doctors, tutors, prime ministers and priestesses. This fact makes Fletcher’s quest all the more interesting as we clearly have been overlooking these great historical figures.

Cleopatra VII Philopator was the last active ruler of the Ptolemaic Kingdom of Egypt, nominally survived as pharaoh by her son Caesarion. As a member of the Ptolemaic dynasty, she was a descendant of its founder Ptolemy I Soter, a Macedonian Greek general and companion of Alexander the Great. After the death of Cleopatra, Egypt became a province of the Roman Empire, marking the end of the Hellenistic period that had lasted since the reign of Alexander (336–323 BC). Her native language was Koine Greek, and she was the first Ptolemaic ruler to learn the Egyptian language.

In 58 BC, Cleopatra presumably accompanied her father, King Ptolemy XII, during his exile to Rome after a revolt in Egypt (a Roman client state) allowed his daughter Berenice IV to claim the throne. Berenice was killed in 55 BC when the King returned to Egypt with Roman military assistance. When he died in 51 BC, the joint reign of Cleopatra and her brother Ptolemy XIII began, but a falling-out between them led to open civil war.

After losing the 48 BC Battle of Pharsalus in Greece against his rival Julius Caesar (a Roman dictator and consul) in Caesar’s Civil War, the Roman statesman Pompey fled to Egypt. Pompey had been a political ally of Ptolemy XII, but Ptolemy XIII, at the urging of his court eunuchs, had Pompey ambushed and killed before Caesar arrived and occupied Alexandria. Caesar then attempted to reconcile the rival Ptolemaic siblings, but Ptolemy’s chief adviser Potheinos viewed Caesar’s terms as favoring Cleopatra, so his forces besieged her and Caesar at the palace.

Pharaoh Hatshepsut enjoyed a peaceful and prosperous reign. She built magnificent temples, protected Egypt’s borders and masterminded a highly profitable trading mission to the mysterious land of Punt. She should have been feted as one of the most successful of the 18th Dynasty kings. Not everyone, however, was impressed by her achievements.

Soon after her death in 1457 BC, Hatshepsut’s monuments were attacked, her statues dragged down and smashed and her image and titles defaced. The female king vanished from Egyptian history. She would remain lost until, almost three thousand years later, modern Egyptologists reconstructed her damaged inscriptions and restored her to her rightful dynastic place.

The Egyptians believed that the spirit could live beyond the grave, but only if some remembrance – a body, a statue, or even a name – of the deceased remained in the land of the living. Hatshepsut had effectively been cursed with endless death. Who could have done such a terrible thing, and why? Tuthmosis III, stepson and successor to Hatshepsut, seems the obvious culprit, but we should not condemn him unheard. There are two major crimes to be considered before we draw any conclusion.

Egypt's Lost Queens: Professor Joann Fletcher explores what it was like to be a woman of power in ancient Egypt.