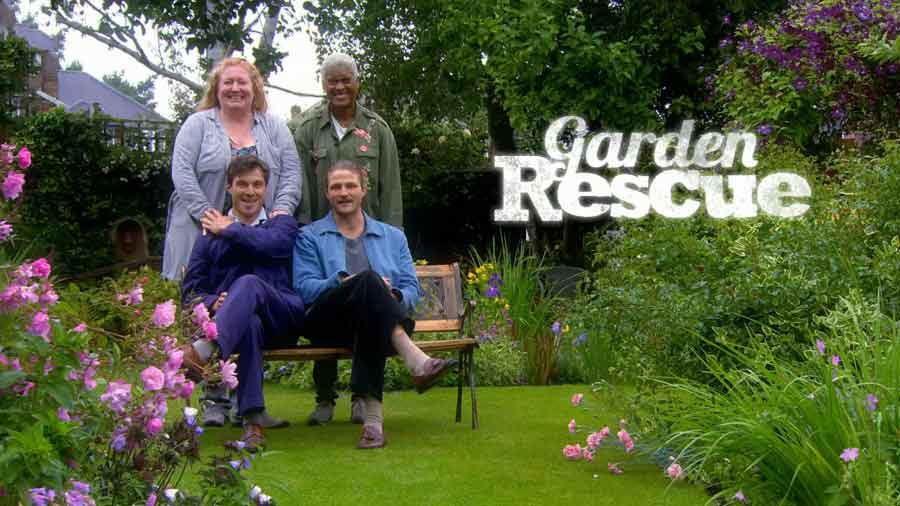 Garden Rescue episode 14 2020 – Thatcham: Lee and his twin daughters, Sophie and Lauren, live in Thatcham, Berkshire. Lee needs a low-maintenance garden as he has a full-time job and the kids to raise alone after his wife, Alexandra, passed away from a brain tumour.

The garden has to be somewhere the children can have fun and play but also remember their mum. Arit and the Rich brothers want to give them the best garden they can, and with an £8,000 budget they have a chance to create something beautiful.

Dimmock first came to the public’s attention in 1997, when she joined the BBC gardening series Ground Force, five years after first meeting the producer/director of the series when she built a pond for the Meridian series, Grass Roots. Dimmock co-presented Ground Force for the eight years it aired. She became known for appearing braless on shows. Calendars featuring her likeness outsold lingerie model Caprice Bourret, and fans nicknamed her horticultural Viagra.

Since then, she has presented such programmes as The Joy of Gardening and Charlie’s Garden Army, as well as presenting coverage of the Chelsea Flower Show. In 2004, she appeared in the Channel 4 reality TV show, The Games. She has also appeared on American television, presenting a gardening slot on The Early Show on CBS. In September 2006, she appeared on the BBC’s Celebrity MasterChef.

During the mid-2000s, after Ground Force had ceased production, she presented a local ITV Meridian series entitled River Walks, in which she walked along various rivers in Southern England, visiting landmarks and attractions along the way as well as meeting people who live and work on the rivers.

Since founding their garden design company Rich Landscapes in 2013 and becoming the youngest team to win gold at the RHS Chelsea Flower show in 2015, the pair have become known for their clean, modern lines, naturalistic planting and cheery, down-to-earth disposition. All of which has brought them projects with fashion houses Chanel and Massimo Dutti, Hampshire hotel Heckfield Place and residential enthusiasts across Europe – as well as a book deal and several television spots on the BBC.

Garden Rescue episode 14 2020 – Thatcham: Lee needs a low-maintenance garden as he has a full-time job and the kids to raise alone.