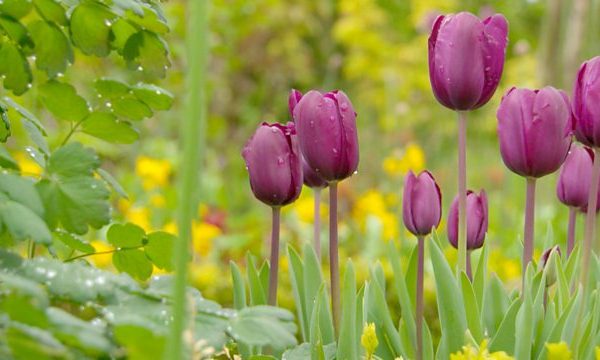 In Gardeners’ World episode 8 2017, Carol Klein visits another of her gardening heroes, Penelope Hobhouse, and finds out about her lifetime of making grand gardens and how she has now created a low-maintenance haven for herself filled with foliage and colour in her small Somerset garden.

We meet Gill Bagshawe, who has filled her plot in the Peak District with raised beds to grow as many different cut flowers as she possibly can. And Alan Power extols the virtues of the Japanese maple as his choice of plant for the golden jubilee award.

Herbaceous peonies provide invaluable colour to borders and cut flower material in late spring and early summer. Their large, often double flowers in whites, pinks and reds add an element of romance and glamour to any garden.

Plants raised indoors or in a greenhouse need to be acclimatised to cooler temperatures, lower humidity and increased air movement for about two to three weeks before they are planted outdoors. This ‘toughening up’ process is known as hardening off.

How to grow bananas

Bananas (Musa and Ensete spp.) produce large, elegant leaves and the occasional bunch of fruits, which certainly make a majestic addition to any garden or conservatory. Although they are tender plants, some species are hardy enough to leave outside over winter, especially in the milder parts of the UK, so they are worth experimenting with in the garden.

How to grow sweetcorn

Sweetcorn is delicious eaten fresh and there are some new selections that are easier to grow in the UK. Mini sweetcorn is a good choice if you haven’t grown your own sweetcorn before as, unlike the large sweetcorn, it doesn’t need to be grown in blocks and you should get five or six cobs from each plant. The plants also make a useful windbreak.

In Gardeners’ World episode 8 2017, Carol Klein visits another of her gardening heroes, Penelope Hobhouse in her small Somerset garden.