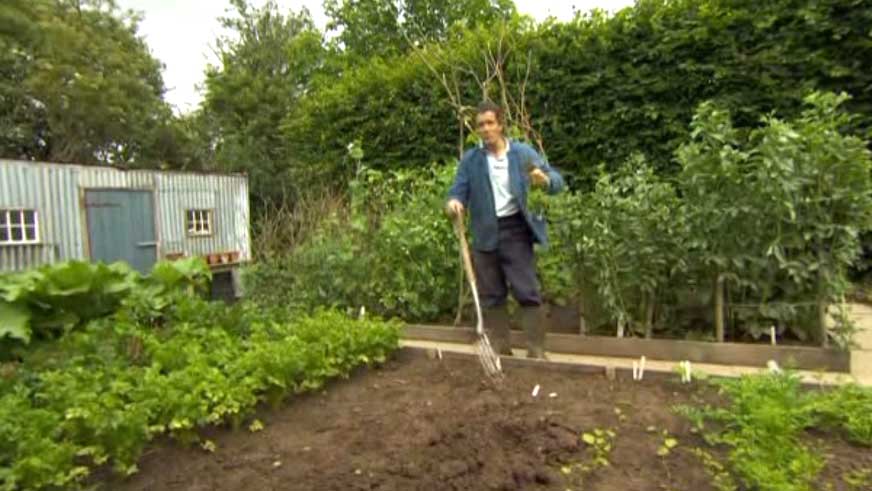 Gardeners World episode 15 2012: At Longmeadow, Monty Don reveals how the garden has changed over the last four weeks and gets to grips with a variety of jobs in the walled garden.

He demonstrates how to cut back hardy biennials to encourage secondary growth, shows us how to thin out our borders as well as other seasonal tasks. If edibles are your passion he’ll be giving tips on what you can sow, such as carrots and beans, as well as harvesting, cooking and tasting his early potatoes to find his favourite variety.

Carol Klein celebrates the hardy geranium. She discovers how they thrive in a wild nature reserve in Somerset and visits East Lambrook Manor, a beautiful garden that is host to a stunning array of this cottage garden stalwart. And Rachel de Thame returns to the army barracks in Didcot where the community garden she’s helping to create is beginning to bloom.

Carol Klein visits a disused colliery to search out our native geraniums. She then meets their garden cousins, the most amenable and adaptable of herbaceous border plants, at the garden of renowned plantswoman, Margery Fish. Mrs Fish was an avid collector of geraniums and many are still to be found at the garden she created at East Lambrook Manor in Somerset.

Pelargonium is a genus of flowering plants which includes about 200 species of perennials, succulents, and shrubs, commonly known as geraniums, pelargoniums, or storksbills. Confusingly, Geranium is the botanical name (and also common name) of a separate genus of related plants. Both genera belong to the family Geraniaceae. Linnaeus originally included all the species in one genus, Geranium, and they were later separated into two genera by Charles L’Héritier in 1789.

With many late spring and early summer blooms now over Monty Don decides to tackle the borders in the Walled Garden and make space to plant blooms which will flower until the autumn. Sweet rocket and foxgloves are pulled out and hardy geraniums cut back. Monty fills the spaces created with half-hardy annuals Nicotiana sylvestris, Cleome ‘White Queen’, and Cosmos Purity’. These half-hardy annuals will fill the garden with colour from now until the first frosts.

Gardeners World episode 15 2012: At Longmeadow, Monty Don reveals how the garden has changed over the last four weeks and gets to grips with a variety of jobs.