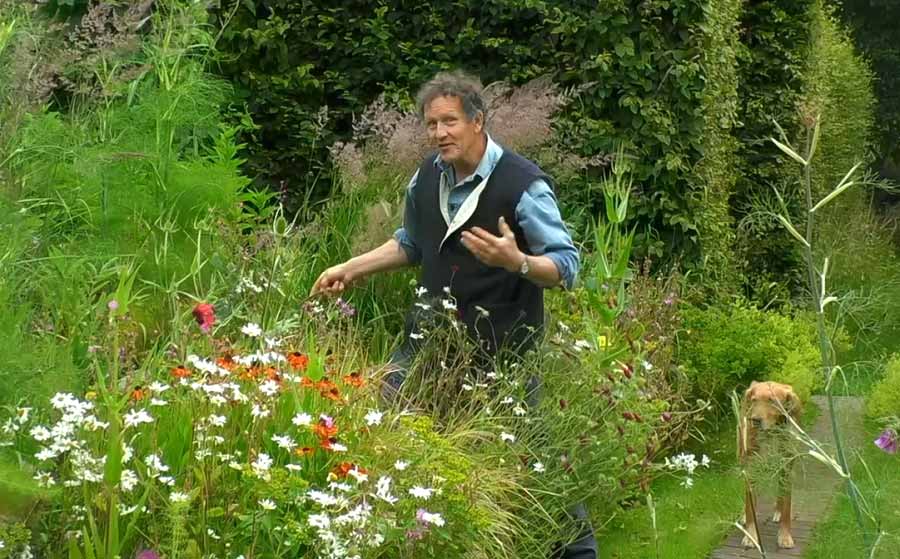 Gardeners World episode 17 2020: At Longmeadow Monty checks the progress of the potatoes he planted earlier in the year and recommends plants for dry shade under trees.

We travel to Somerset to get water saving tips from a water scientist who uses a variety of techniques to save as much water as possible in her own garden and we meet a gardener who has filled his home with over one thousand houseplants. In 2019 Nick Bailey gave a masterclass on how to grow summer flowering Clematis and Arit Anderson took a boat trip to meet a group of people who were planting up the Birmingham canal sides for both wildlife and the wellbeing of city dwellers. Plus we feature a few more hints, tips and stories from viewers’ gardens.

Potatoes are hugely versatile and a staple ingredient of many meals in one form or another – boiled, mashed, chipped or baked. They are classified as being either earlies or maincrops. Early varieties are ready to harvest much sooner than maincrops and are what we call ‘new potatoes’. Maincrop varieties are in the ground a lot longer. They have a better yield and produce larger potatoes.

Potatoes are grown from special ‘seed’ potatoes (also called tubers). These are just like potatoes you buy from the supermarket, but they’re certified virus-free. Buy seed potatoes from late winter onwards. You start them off indoors by setting them to sprout, before they are planted.

It’s important with earlies and a good idea with maincrops to ‘chit’ the seed potatoes first before planting; this means allowing them to start sprouting shoots. Stand them rose end up (the rose end is the one with the most small dents in the skin, or ‘eyes’) in egg boxes or similar in a light, frost-free place. The potatoes are ready to plant when the shoots are about 3cm (1in) long. On early potatoes, rub off the weakest shoots, leaving four per tuber.

How to grow clematis

One of the most popular garden plants, clematis produce masses of flowers in a variety of shapes and colours. From vigorous to compact climbers, as well as herbaceous types for a sunny border, here’s everything you need to know to grow these plants in your garden. Most clematis grow best in a sunny or part-shaded position, but there are plants available to suit any aspect. Consider the conditions in your garden and choose a plant that will thrive there, whether that’s a shady wall or a particularly hot and sunny one.

Clematis wilt is a fungal disease of clematis, particularly the large-flowered hybrid cultivars. The fungus causes rapid wilting and, in severe cases, can kill the whole plant. Clematis wilt is a disease of clematis caused by the fungus Calophoma clematidina (syn Phoma clematidina, Ascochyta clematidina). Several of the large-flowered hybrid cultivars are very susceptible, but the smaller flowered species appear to be much more resistant.

Calophoma clematidina can survive in the soil on dead plant material and organic matter. Infection occurs when spores are splashed or otherwise carried to leaves or young stems. Infection spreads to the shoots and stems (which, when split open, are stained black inside) and causes rapid wilting and death. The root system is often not killed and young shoots frequently regenerate from or below ground level. The disease is not immediately fatal, but infected susceptible cultivars will usually die eventually.

Gooseberries, red and white currants can be grown either as bushes, or as upright cordons, which take up less space and can be planted closer together for a mixture of different varieties in a small garden. They can also be trained as fans against a wall. Other forms available – especially for gooseberries – include standards or tree-like forms with a bushy head on a short trunk. These are obtained as grafted or budded plants with a clear ‘trunk’ of 1-1.2m (3½-4ft) high.

Gardeners World episode 17 2020: Monty checks the progress of the potatoes he planted earlier in the year and recommends plants for dry shade under trees.