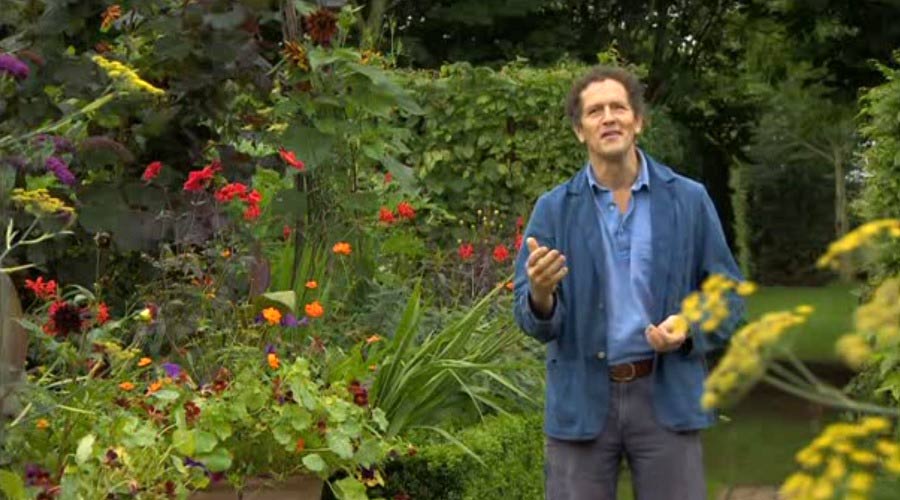 Gardeners World episode 21 2012: By the end of August, some perennial plants will be setting seed and, for gardeners on a budget, this is the time to collect, store and sow them to stock our gardens for free. Monty demystifies the process by showing us which seeds to sow now, which to save for later and which ones respond better to a bit of time spent in the fridge.

Carol extols the virtues of the cow parsley family and shows us how versatile and hardy this plant’s relatives can be when she meets a gardener who uses many different varieties in his Surrey garden.

Gardener Geoff Hoyle gave up growing vegetables in favour of flowers and became so obsessed with dahlias that he now fills his small back garden with hundreds of bright and colourful varieties. And Monty responds to the many viewers who have written in to the programme about their box plants which are, like his, showing symptoms of blight.

Many garden perennials are now producing seed. Monty Don collects, stores, and sows seed. It is a cost effective way to increase the numbers of favourite plants. Some seed prefer to be sown straight away; Monty sows ripe seed of Meconopsis and green seed of Primula florindae.

Lack of collectable seed: Some plants are sterile and cannot set seed. Trying to collect seed from such plants will obviously be disappointing. Others (e.g. holly) may carry male and female flowers on separate plants so male plants will never bear seed.

Seed production can be exhausting for a plant so it is also not uncommon for seed production to be cyclical – some years will be good for harvesting, others bad – or it may simply be that weather conditions for that season were not favourable, perhaps due to a late frost or drought.

Poor viability (the length of time that seed stays alive and able to germinate): If seed is sown but fails to germinate, it suggests it was not viable. Seed viability depends on the condition of the seed when first stored, how long it is stored and what seed is being kept.

Monty Don’s tomatoes have succumbed to blight. The potatoes, which were growing close by, were also blighted. The fungal spores were probably carried into the greenhouse on the wind from the potato patch. The blight has spread to some of the fruits and Monty salvages what he can to make green tomato chutney and the remainder will need to be destroyed.

Potato and tomato blight is a disease caused by a fungus-like organism that spreads rapidly in the foliage and tubers or fruit of potatoes and tomatoes in wet weather, causing collapse and decay. It is a serious disease for potatoes and outdoor tomatoes, but not as common on tomatoes grown in greenhouses.

Blight is specific to tomatoes, potatoes and some ornamental relatives of these two crops. Cases have been recorded on ornamental Solanum species (e.g. S. laciniatum), and also on Petunia.

Gardeners World episode 21 2012: By the end of August, some perennials will be setting seed and, for gardeners on a budget, this is the time to collect.