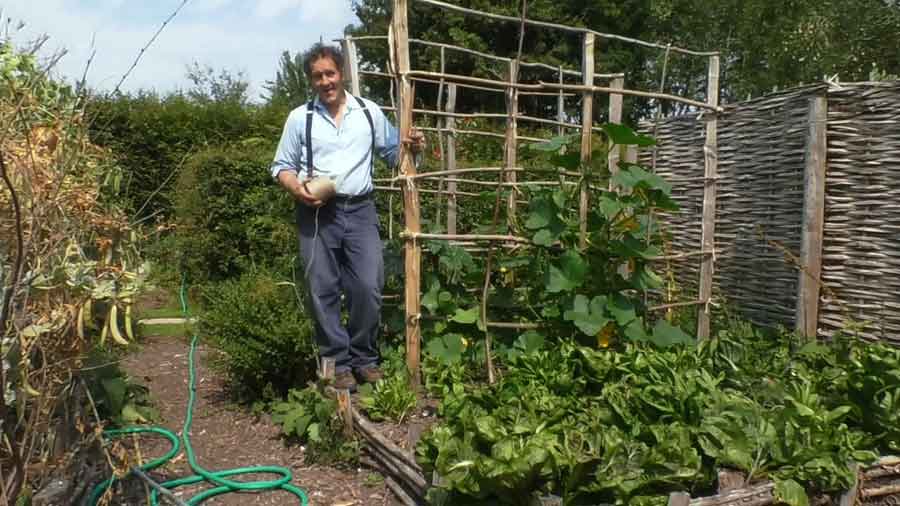 Gardeners World episode 23 2020: At Longmeadow, Monty plans for next spring when he plants some early-flowering wildflowers and gives his recipes for the different compost mixes he uses to take successful cuttings.

Nick Bailey continues his quest for the South African origins of our much-loved summer bulbs, and in the heart of London, we meet a keen gardener who has filled her houseboat with ornamental and edible plants.

From the archives, we meet a man who took on a barren Lincolnshire field and turned it into a haven for wildflowers, and we travel to Preston to visit a woman who is passionate about propagation and, in particular, pineapples. And find out what viewers have been doing in their own gardens.

Cannas are vibrant tender perennials that produce bold leaves and showy flowers in shades of red, orange, yellows and pinks. It is a useful summer bedding plant for both containers and borders, but does well in cool conservatories in summer. Cannas can be grown in borders or containers. They are grown from rhizomes (underground stems), which you will find for sale in late winter in bags of shredded paper, or sold loose. Cannas are easy to grow from rhizomes, but you can also buy plants over the summer.

Start rhizomes off into growth in March or early April by planting in 20cm (8in) pots using multi-purpose compost. The rhizomes should be just covered with compost, leaving any young shoots exposed. Water lightly. Keep the rhizomes at a temperature of 10-16°C (50-60°F), such as in a heated greenhouse or sunny conservatory. If heating is not available, delay potting until April. Increase watering as growth develops.

Move the plants to a cool greenhouse in mid-April and gradually harden off before planting out at the end of May (or when the last frosts have past).

Plant about 75cm (30in) apart, 10cm (4in) deep. In borders, choose a sheltered, sunny spot and soil that has been improved by digging in well-rotted manure or garden compost. Also apply a general purpose fertilizer, such as growmore, at 70g per sq m (2oz per sq yd).

How to grow runner beans

Quintessentially British, runner beans are a delicious garden staple. Most varieties grow tall and produce colourful red, white or bi-coloured flowers. Shop bought runners can be tough and stringy, but picking your own will make you see them in a new light. To many gardeners, summer is incomplete without them.

Wait until late May or June to sow the seeds outdoors. It is best to start the beans in small pots. Sow one bean per pot 5cm (2in) deep. Place the pots outside in a coldframe, or in a sheltered position. Once the beans reach 8cm (3in) tall you can plant them out into their final positions, this will be in June or July.

Alternatively, sow your chosen runner beans directly in the ground from mid-May until end of June, 5cm (2in) deep, two seeds to a 2.4m (8ft) bamboo cane (see below), spaced 15cm (6in) apart; thin to one seedling per cane. For the ideal site, see below.

Squashes are easy to grow from seed and can be sown outdoors in the spot where they are to grow, or you can start them off indoors in pots. Sow two or three seeds 2.5cm (1in) deep outdoors in late May or early June and cover with cloches, jars or plastic; leave in place for two weeks, or as long as possible, after germination. Thin the seedlings to leave the strongest one.

For earlier crops or in cold regions sow seeds indoors on their side, 13mm (½in) deep in 7.5cm (3in) pots of compost from mid- to late April at 18-21ºC (65-70ºF). If you don’t have the space to raise squash seedlings, you can also buy young plants from garden centres in spring and these usually can be planted outdoors straight away. Check specific plant information.

Softwood cuttings can be used to propagate a wide range of perennials and deciduous shrubs, as well as some trees, in spring and early summer. Material is taken from the soft and flexible young shoot tips, which root readily.

Softwood cuttings are mostly used for propagating hardy and tender perennials such as Anthemis, Aubrieta, Argyranthemum, Bidens, Osteospermum, Penstemon, Pelargonium, Petunia and Verbena. This technique can also be used for a wide range of mainly deciduous shrubs, such as Buddleja, Fuchsia, Hydrangea, Lavatera, Perovskia as well as for some trees, such as Betula, deciduous magnolia and some maples.

Softwood cuttings have the highest rooting potential of any stem cutting and often provide the best chance of rooting species that are difficult to propagate.

When the flowers of yellow-rattle fade, the brown calyxes (containing the sepals) in which the tiny seeds ripen can be seen and heard – they give a distinctive ‘rattle’, hence the common name. Yellow-rattle is an annual that thrives in grasslands, living a semi-parasitic life by feeding off the nutrients in the roots of nearby grasses.

For this reason, it was once seen as an indicator of poor grassland by farmers, but is now often used to turn improved grassland back to meadow – by feeding off the vigorous grasses, it eventually allows more delicate, traditional species to push their way through.

Gardeners World episode 23 2020: At Longmeadow, Monty plans for next spring when he plants some early-flowering wildflowers