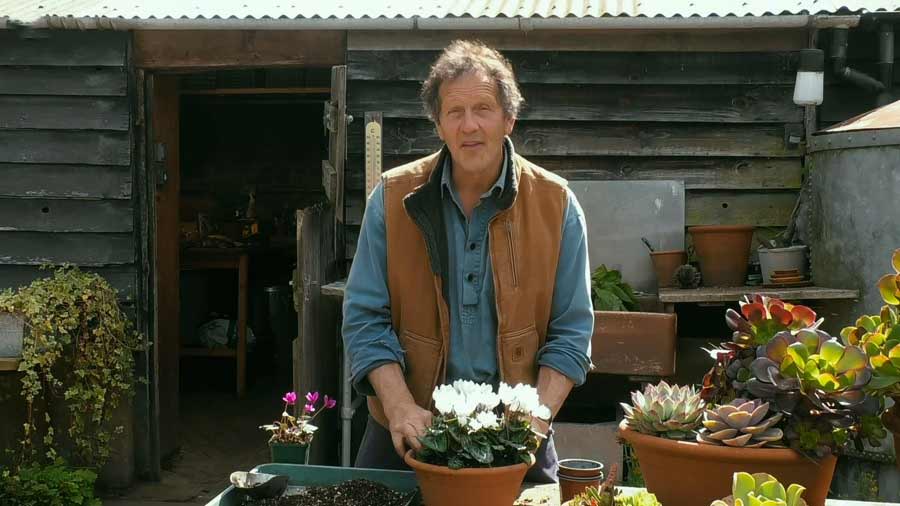 Gardeners World episode 26 2020: At Longmeadow this week, Monty reaps a harvest from the vegetable garden, plants up a seasonal pot and gives a masterclass on how to make the perfect compost.

Adam Frost travels to York to meet a couple who took on 20 acres of land and filled it with flowers, and in Walsall, the team visit a garden planted with exotic palms and foliage which has made a positive contribution to the owner’s mental health.

There is another chance to see Carol Klein as she finds a collection of late-summer-flowering bergamot plants in Wales and gives her advice on how to grow and propagate them. In Lancashire, Nick Bailey meets a zoologist who has spent his life exploring the microscopic insects that live in the soil.

Home composting is the most environmentally-friendly way of dealing with kitchen and garden waste, plus it produces compost that can be used as an excellent soil improver. Composting is useful in all gardens. Only in the very smallest gardens will it be difficult to find space for a compost heap and material to fill it. Owners of such small plots could consider worm composting instead. Although councils offer green waste collections, the RHS encourages home composting because it does not involve heavy transport, with its associated environmental costs.

Composting is done all year, as and when suitable materials are generated in the garden or home. However late summer to early winter is the peak time for making compost.

It is important that the site is not subjected to extremes of temperature and moisture, as the micro-organisms (bacteria and fungi) that convert the waste to compost work best in constant conditions. Position the bin in light shade or shade; it is often more convenient to use a shady area of the garden.

An earth base allows drainage and access to soil organisms, but if you have to compost on a hard surface, then add a spadeful of soil to the compost bin.

Bins retain some warmth and moisture and make better compost more quickly, but even an open heap (not enclosed in a bin) will compost eventually. Any of the compost bins on the market should produce compost as long as they exclude rain, retain some warmth, allow drainage and let in air.

Worm composting is an efficient method of turning kitchen waste and small amounts of garden waste into nutrient-rich compost and a concentrated liquid fertiliser. However, it is not a substitute for conventional composting.

A ‘worm bin’ or ‘wormery’ usually consists of at least two compartments; a lower collection sump for the liquid and an upper composting area where the kitchen waste goes in and the worms actively work. However, single compartment wormeries can be also used.

The worms used for composting are known by various names; brandling, manure, red or tiger worms. These include the species Eisenia foetida, E. andreii and Dendrabaena veneta. Composting worms live in decaying organic matter, whereas earthworms are soil dwellers. They are smaller and darker red than the common earthworm, Lumbricus terrestris, which is unsuitable for using in worm composting.

These can be added to your compost heap but the best use of them is to make leafmould. Stuff wet leaves into black plastic sacks (loosely tied), or an open wire mesh container. The resulting leafmould is ready to use after a year or two.

Mix well with browns to avoid a slimy mess. Alternatively, leave on the lawn whenever possible – they will soon disappear and feed the grass; this will not cause ‘thatch’. Can also be mixed into a leafmould heap, or used directly as a soil mulch.

Plant materials suffering from soil-borne diseases such as clubroot and white rot should not be added to a compost heap. Anything else can be safely composted in a hot heap. Diseases that don’t need living matter to survive, such as grey mould, mildews, and wilts, may survive in a cold heap.

But heat is not the only factor that will kill diseases: the intense microbial activity in a compost heap also helps to dispose of them. Some diseases, such as tomato and potato blight need living plant tissue to survive and will not last long without it. It is fine to add foliage suffering from these diseases to your hot or cold compost heap. If in doubt, leave it out. Problem materials can be sent to your local council green waste recycling facility where the composting methods are hot enough to kill any problem organisms.

Some perennial weeds will be killed in a hot heap; avoid really persistent horrors such as celandine, docks, bulbous buttercup, ground elder and bindweed. Don’t burn or dump these weeds – they are rich in plant foods. Mix with grass mowings in a plastic sack. Tie it up and leave for a few months until the weeds are no longer recognisable, then add to the compost heap. Or send them to your local council green waste recycling facility where the composting methods are hot enough to kill them off.

Many insects found in gardens do not feed on plants these include insects such as ground and rove beetles most of which feed on other invertebrates. Ground beetles (Carabidae) and rove beetles (Staphylindae) are families of beetles which are largely ground dwelling, most are predatory and part of a well balanced garden ecosystem. There are about 350 species of carabid and 1000 species of staphylinid beetles in Britain.

These beetles can be encouraged in gardens by providing habitats for wildlife particularly wood piles, compost heaps and leaving some leaf litter in garden borders.

How to store apples & pears

If handled carefully and placed in the right environment, fruit from your garden may be stored for several weeks, or even months. So, with a little planning, you could be eating your own apples at Christmas. Extra measures such as wrapping apples individually in newspaper or tissue paper can help them keep longer but will be a hindrance to regular inspection.

If no suitable storage conditions are available, small quantities of apples can be put in plastic bags in the fridge to store for a few weeks. Fill a bag with 2-3kg (4lb 6oz – 6lb 10oz) of fruit, pierce several holes in it and fold the top loosely to allow air circulation.

Storing some pears loose in the salad compartment of the fridge can help to delay ripening until after those in store have been used.

A delightful tuberous perennial providing colour often when little else is flowering, particularly in late winter or early spring. Hardy cyclamen species and cultivars are ideal for naturalising under trees, on banks or in a shady border and planted in association with other early-flowering woodland plants such as snowdrops, winter aconites and primroses.

Cyclamen are not difficult to grow in the garden, provided the site is not overly dry or sunny, as shown in Gardeners World episode 26 2020.

Collect seed of most cyclamen species when the flower-stalk coils, drawing the seed capsule closer to the soil surface to release the ripe seed. Best sown fresh, seeds should be sown immediately after soaking overnight, in a mix of equal parts seed compost and sharp grit. Cover seeds carefully with a thin layer of seived compost as light can inhibit germination.

Cover the container in a clear plastic bag and keep at a minimum temperature of 16°C (60°F) in light shade until large enough to transplant.

A green roof system is an extension of the existing roof which involves, at a minimum, high quality water-proofing, root repellent system, drainage system, filter cloth, a lightweight growing medium, and plants.

Green roof systems may be modular, with drainage layers, filter cloth, growing media, and plants already prepared in movable, often interlocking grids, or loose laid/built-up whereby each component of the system may be installed separately. Green roof development involves the creation of “contained” green space on top of a human-made structure. This green space could be below, at, or above grade, but in all cases it exists separate from the ground. Green roofs can provide a wide range of public and private benefits and have been successfully installed in countries around the world.

Tomatoes are very easy to grow from seed. Alternatively, you can buy tomato plants from late spring from garden centres; these are a good option where you can’t maintain the right conditions for germination and growing on. Grafting your own or buying grafted plants is another way to raise tomatoes.

Sow seed in late March to early April for outdoor crops, and in mid-February for growing in an unheated glasshouse. Seed can be expensive, but usually only a few plants are needed, and germination is usually good.

Gardeners World episode 26 2020: Monty reaps a harvest from the vegetable garden and gives a masterclass on how to make the perfect compost.