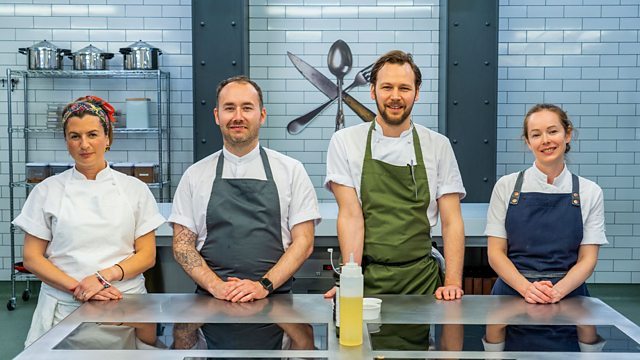 Great British Menu 2021 episode 4 – Scotland Starter and Fish: Great British Menu moves on to the Scotland heats. Competing for the top spot are four chefs, three of them all known to each other as they all have their own restaurants in Edinburgh. There is a reigning champion from last year for Scotland, Roberta Hall, and she is joined by fellow capital chefs Stuart Ralson and Scott Smith. The fourth competitor is returner Amy Elles, who has a seafood restaurant by the coast in Fife. She lost out to Roberta in last year’s Scotland final.

Presenter Andi Oliver welcomes them to the kitchen, where the theme for this year’s competition is a celebration of British invention and innovation. Given Scotland’s historic success with scientific discovery, the chefs have plenty of inspiration to draw upon, from the invention of television and toasters to penicillin.

One of the four must leave the competition at the end of the episode. Which one that is will be decided by the veteran judge of this week’s competition, a previous winner who remains a surprise to the chefs until the moment they walk into the kitchen to taste their first course: canapes.

Veteran and Michelin-starred Tom Brown, a seafood specialist, tastes their canapes, which range from a cheese tart to a duck liver parfait.

The starter dishes draw upon Scotland’s proud history of medical discovery and innovation, with a crispy shredded beef and Lanark blue cheese dish presented in a dish shaped like a giant petri dish to celebrate Alexander Fleming’s invention of antibiotics, and another a homage to the ‘Edinburgh Seven’, the first women medical students at Edinburgh University. The other two starters both take as their inspiration the invention of ‘family planning’. One, ‘the birds and the bees’, is a quail and honey dish, while the other uses aphrodisiac ingredients. But which will Tom score highest?

Then it is on to the fish course, veteran judge Tom’s specialty. He has a traditional Cullen Skink soup served with turbot to try from Roberta, on a dish celebrating the work of Edinburgh born physicist James Maxwell. The dish is served on a colour wheel as an homage to his invention of the first colour photograph. Another lobster dish pays homage to Scottish scientific pioneer Mary Sommerville and her work in the field of astronomy. But one chef must be sent home by Tom.

Nigella: At My Table ep.2