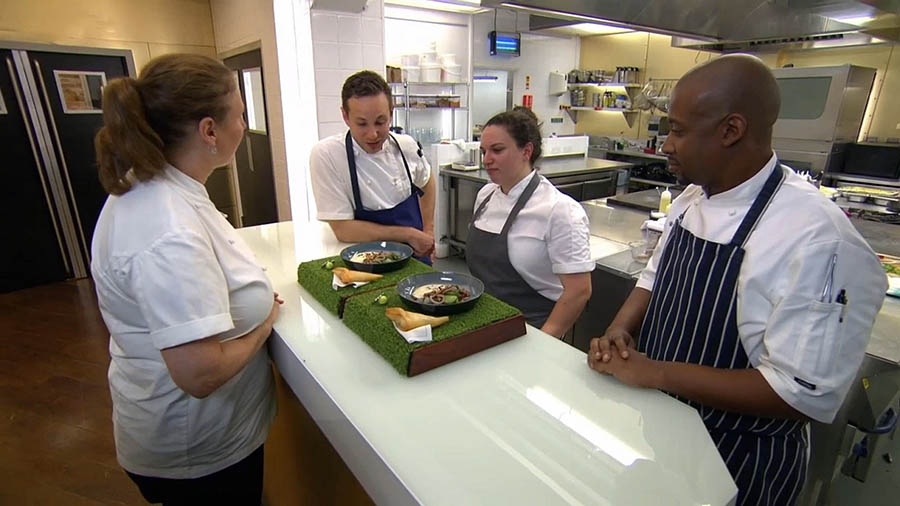 Great British Menu episode 1 2017, it is the turn of three chefs from London and south east England who are all first timers in the competition. Tom Kemble is one of the youngest chefs in the country to hold a Michelin star and cooks at a restaurant in one of London’s most exclusive auction houses. He is up against Mike Reid, who has cooked around the world and trained under both Gordon Ramsay and Michel Roux Jr, and Selin Kiazim, rising star of the London scene, renowned for her Turkish Cypriot fusion flavors.

The three chefs meet their surprise veteran judge and cook their summery starters. A dish celebrating childhood summer memories takes on a complicated courgette dish and a technically tricky take on the cucumber sandwich.

Michelin-starred Tom is eager to prove himself. His starter is based on the classic Spanish dish gazpacho and his summer memories spent with his grandma in Marbella. Rising star Selin creates a reworked version of the cucumber sandwich with influences from her Turkish Cypriot heritage, while internationally trained Mike makes a courgette salad inspired by his time in Australia.

Great British Menu is back. 24 of the nation’s top chefs compete for a chance to show off their culinary skills at a banquet honoring 140 years of the iconic Wimbledon Championships. The chefs have been challenged to create outstanding dishes that capture a ‘taste of summer’ and the prestige of Wimbledon. Their menu must reflect the tastes, smells and colors of everybody’s favorite time of year and pay tribute to the incredible history and prestige of the tournament.

Great British Menu episode 1 2017, it is the turn of three chefs from London and south east England who are all first timers in the competition.