This week in Great British Menu episode 9 2017, it is the south west heats as two ambitious newcomers, Tom Brown and Andy Clatworthy, take on returning chef Dominic Chapman. All three chefs are honouring Wimbledon and the British summer with their technically challenging strawberry desserts – but only two will make it through to the regional final.

Third-time competitor Dom knows the importance of scoring highly today and is pushing himself to produce the perfect dish. With doughnuts as one of his main components, he is worried about whether he will be able to prove his dough in time.

Tom is concerned that in the high heat of the Great British Menu kitchen, his refined take on an ice cream sandwich won’t set in time. Andy shocks everyone when he reveals the central flavour in his tennis court-inspired dessert is the strong savoury herb lovage. Only the two highest scorers will go through to cook for the judges. 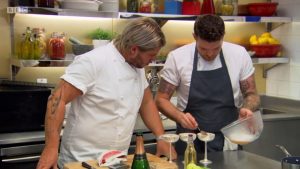