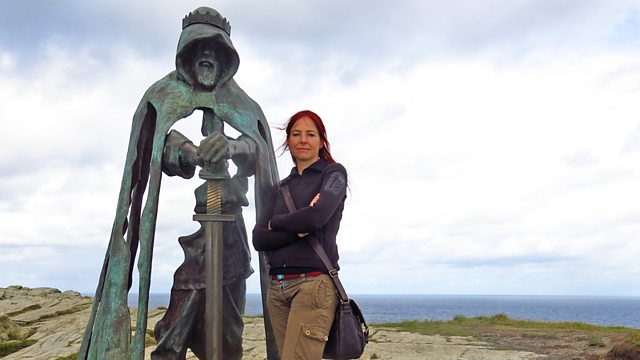 With exclusive access to a major new excavation, Alice Roberts pulls together all the latest evidence to reveal what Dark Age Britain was really like. In the fifth century, the future of Britain hung in the balance; after four centuries of straight roads and hot and cold running water the Romans upped and left, called back to support their own ailing Empire.

The country quickly descended into chaos, plunging the native population into poverty and instability as their livelihoods – many dependent on the Romans – disappeared almost overnight. The nation was vulnerable and it didn’t take long for Anglo-Saxon invaders to take advantage; a vast bloodthirsty army quickly overran the country, killing the locals and settling down to change the history of the British Isles forever.

At least, that is what the fragmentary historical texts record, but the truth is we don’t actually know what happened. There is no reliable written account of events and for two whole centuries sources provide the names of less than ten individuals. This pivotal moment in our national history has been shrouded in mystery until now.

In this landmark history film, Professor Alice Roberts uses exciting new archaeological discoveries to decode the myths and medieval fake news, piecing together a very different story of this turning point in Britain’s history. The story begins with exclusive access to the excavations of an unprecedented stone palace complex on the Tintagel peninsula in Cornwall. Long known to have been a Dark Age settlement the new evidence reveals that Tintagel was also a seat of power, but who ruled there? The rocky outcrop has mythical connections with the legendary King Arthur, but there has never been any evidence found that he actually lived there or even existed.

Alice explores the link between the Arthur legend and the location, tracking down the early sources for the period and the first written reference to King Arthur. She discovers the story of a divided Britain – bloodthirsty conquering Anglo-Saxons in the east and embattled Britons in the west. Into this great divide the legend of King Arthur was born, a heroic defender of the native population against the invading Anglo-Saxon hordes, but is there any archeological evidence that the written accounts are true?

Alice Roberts pulls together all the latest evidence to reveal what Dark Age Britain was really like.

A History of Ancient Britain episode 3