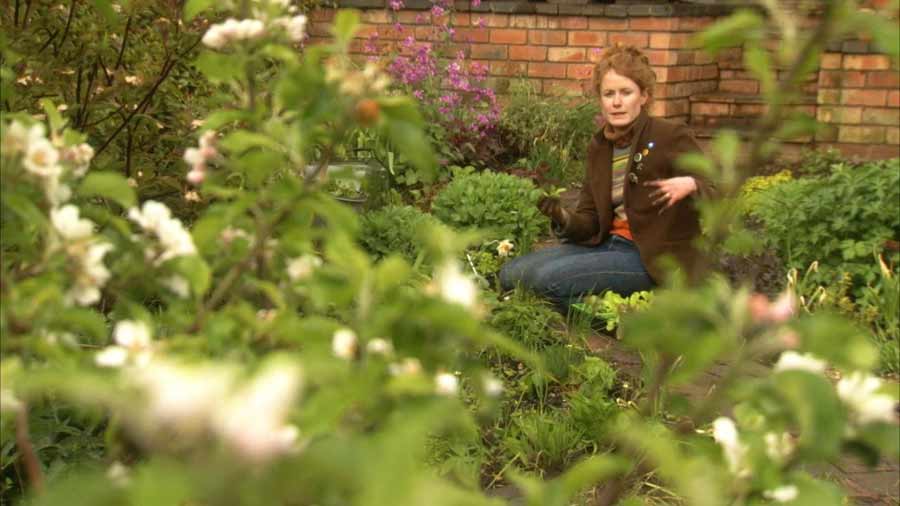 The Edible Garden episode 2 – Salads: Salad crops are some of the easiest things to grow and the tastiest to eat. Alys Fowler attempts to avoid shop-bought fruit and vegetables and live off her own, home-grown produce, all from her tiny terraced back garden. It is no easy task because Alys doesn’t want to turn her garden into an allotment, so she is growing her fruit and vegetables among her flowers.

Alys will focus on different foods and show how anyone can grow, cook and eat from their own garden – even if they live in a city.

Alys weaves salad crops through the flower borders of her small urban back garden. Lettuces, tomatoes and cucumbers can go from garden to plate in minutes. But while her garden takes root, she needs to fill the hungry gap by foraging in ‘the wild larder’, to make lime-leaf salad, dandelion fritters and ‘home brewed’ nettle beer.

Lettuce (Lactuca sativa) is an annual plant of the daisy family, Asteraceae. It is most often grown as a leaf vegetable, but sometimes for its stem and seeds. Lettuce is most often used for salads, although it is also seen in other kinds of food, such as soups, sandwiches and wraps; it can also be grilled. One variety, the woju (莴苣), or asparagus lettuce (Celtuce), is grown for its stems, which are eaten either raw or cooked. In addition to its main use as a leafy green, it has also gathered religious and medicinal significance over centuries of human consumption.

Europe and North America originally dominated the market for lettuce, but by the late 20th century the consumption of lettuce had spread throughout the world. World production of lettuce and chicory for calendar year 2017 was 27 million tonnes, 56% of which came from China.

How to grow lettuce

Choose the right varieties and you can have lettuce almost all year round. There are so many types of lettuce to choose from – all with different colours, flavours and textures – that salad need never be boring! There are two main types of lettuce – hearting lettuces have a dense centre, while loose-leaf lettuces have open leaves and no heart. You can also grow a variety of salad leaves that can be picked while young and tender.

Grow lettuces in full sun on moisture-retentive soil. Early and late sowings may need protection against cold, using cloches, plastic tunnels or horticultural fleece. All these types of protection will be available at garden centres.

The Edible Garden episode 2 - Salads: Salad crops are some of the easiest things to grow and the tastiest to eat, Alys will focus on different foods.