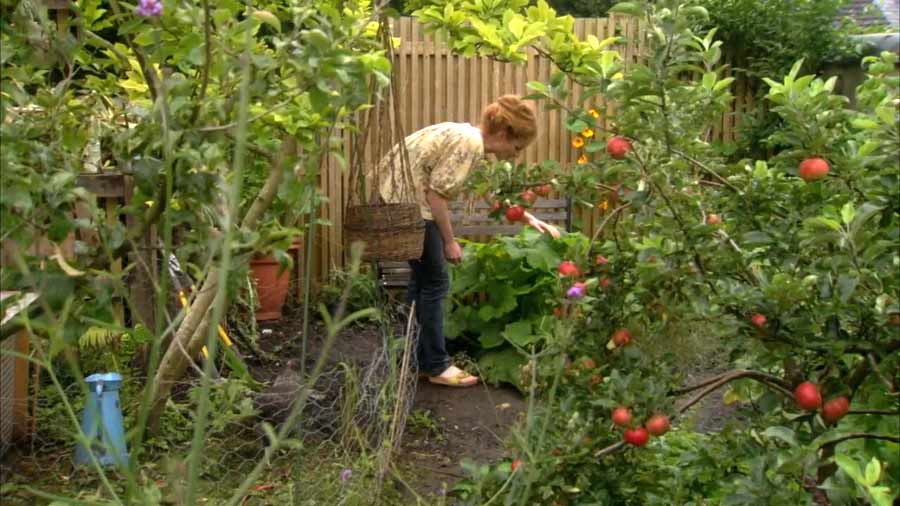 The Edible Garden episode 6 – The Winter Larder: Alongside courgettes, squashes and kale, Alys grows Jerusalem artichokes to harvest when the rest of the garden sleeps.  Alys Fowler attempts to avoid shop-bought fruit and vegetables and live off her own, home-grown produce, all from her tiny terraced back garden. It’s no easy task because Alys doesn’t want to turn her garden into an allotment, so she’s growing her fruit and vegetables among her flowers.

Alys will focus on different foods and show how anyone can grow, cook and eat from their own garden, even if they live in a city. As well as providing fruit and vegetables to eat in season, an edible garden needs to provide for the leaner months. That means growing crops that guarantee a plentiful harvest, enough to enjoy right away and enough to store.

Alongside courgettes, squashes and kale, Alys grows Jerusalem artichokes to harvest when the rest of the garden sleeps. She also learns how to preserve the flavours of her garden using simple pickling recipes and forages for seeds in the ‘wild larder’. Finally, Alys plants up winter crops to tide her over until next spring.

How to grow courgettes

Courgettes are so easy to grow – and you get so many courgettes from each plant – expect three or four a week if you grow your own! Courgette plants like to spread out (about a square metre/yard each) but you can always plant them in big pots or growing bags if you’re short of space.

Two weeks before planting or sowing seed outdoors, make planting pockets 90cm (3ft) apart for courgettes, 90cm (3ft) for bush plants of summer squashes and 1.5m (5ft) for trailing plants of summer squashes. Do this by making a hole about a spade’s depth and width and fill it with a mixture of compost or well-rotted manure and soil. Sprinkle a general fertiliser over the soil. Plant one plant in each planting pocket.

For indoor-raised plants, harden off (acclimatise) before planting. Do this by moving young plants into a coldframe for a week. If you don’t have a coldframe, move plants outdoors during the day, then bring in at night for a week, then the following week, leave them out in a sheltered spot all day and night.
Plant outside on top of your planting pocket in early June.

You can also grow courgettes, marrows and summer squashes in growing bags or containers (at least 45cm/18in wide). Plant one or two per growbag, or one per container. These will need regular watering as they mature.

How to grow squash

Squashes are easy to grow from seed and can be sown outdoors in the spot where they are to grow, or you can start them off indoors in pots.

Sow two or three seeds 2.5cm (1in) deep outdoors in late May or early June and cover with cloches, jars or plastic; leave in place for two weeks, or as long as possible, after germination. Thin the seedlings to leave the strongest one.

The Edible Garden episode 6: Alongside courgettes, squashes and kale, Alys grows Jerusalem artichokes to harvest when the rest of the garden sleeps.