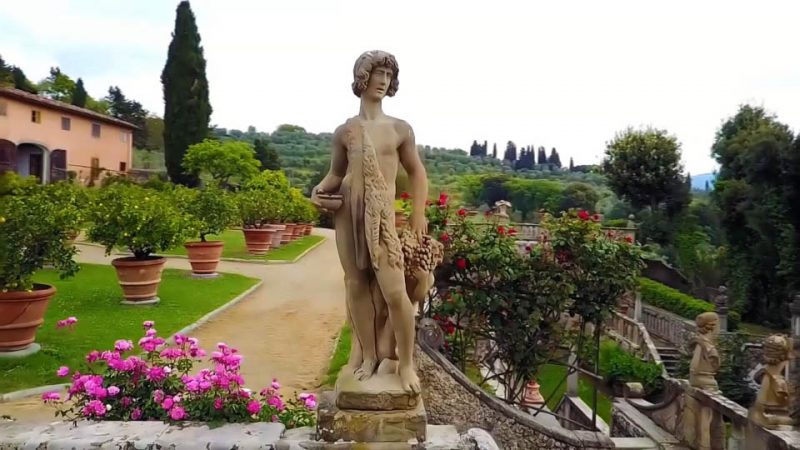 Jean-Philippe Teyssier, landscape architect, takes us on a journey to discover the most beautiful gardens in France and Europe. Beautiful example of harmony, the garden of the Villa Gamberaia dominates Florence and summarizes the art of Italian gardens.

The park of the Villa Gamberaia retains its Renaissance imprint through the presence of iconic materials of the time: pebbles, slag and especially shells. Its orangery reminds us: citrus fruits are the kings of the Italian garden, used in the natural pharmacopoeia, the production of perfumes, cooking, but also as a gift for distinguished guests.

Villa Gamberaia is a seventeenth-century villa near Settignano, outside Florence, Tuscany, Italy. It is it characterized now by eighteenth-century terraced garden. The setting was praised by Edith Wharton, who saw it after years of tenant occupation with its parterre planted with roses and cabbages, and by Georgina Masson, who saw it restored by Sig. Marcello Marchi after its near ruin during the Second World War. to the immaculately clipped and tailored condition today.

The villa, originally a farmhouse; was owned by Matteo Gamberelli, a stonemason, at the beginning of the fifteenth century. His sons Giovanni and Bernardo became famous architects under the name of Rossellino. After Bernardo’s son sold it to Jacopo Riccialbani in 1597, the house was greatly enlarged, then almost completely rebuilt by the following owner, Zenobi Lapi; documents of his time mention a limonaia and the turfed bowling green that is part of the garden layout today.

In 1717 La Gamberaia passed to the Capponi family. Andrea Capponi laid out the long bowling green, planted cypresses, especially in a long allée leading to the monumental fountain enclosed within the bosco (wooded area), and peopled the garden with statues, as can be seen in an etching by Giuseppe Zocchi dedicated to marchese Scipione Capponi, which shows the cypress avenue half-grown and the bowling green flanked by mature trees that have since gone. The villa already stood on its raised platform, extended to one side, where the water parterre is today. The parterre was laid out with clipped broderies in the French manner in the eighteenth century, as a detailed estate map described by Georgina Masson demonstrates. Olive groves have always occupied the slopes below the garden,[which has a distant view of the roofs and towers of Florence.

Beautiful example of harmony, the garden of the Villa Gamberaia dominates Florence and summarizes the art of Italian gardens.