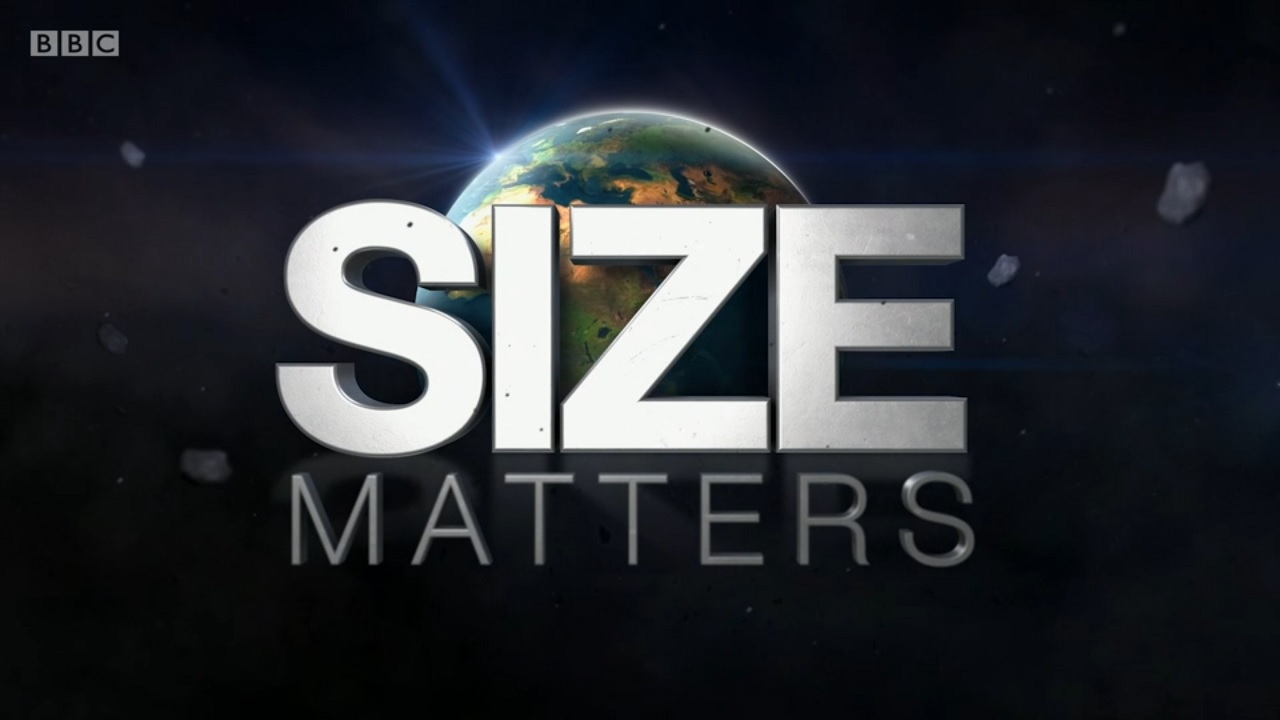 Size Matters episode 2: This two-part special presented by Hannah Fry shows that when it comes to the universe, size really does matter. Hannah takes the audience into a thought experiment where the size of everything can be changed to reveal why things are the size they are.

Having discovered in the first episode that making things bigger ends in disaster, in episode two, Hannah is going the other way by asking whether everything could, in fact, be smaller. But going smaller turns out not to be much safer…

First, we shrink the Earth to half its size – it starts well with lower gravity enabling us to do incredible acrobatics, but things gradually turn nasty as everyone gets altitude sickness – even at sea level. Then we visit Professor Daniel Lathrop’s incredible laboratory, where he has built a model Earth that allows us to investigate the other effects of shrinking the planet to half size. The results aren’t good – with a weaker magnetic field we would lose our atmosphere and eventually become a barren, lifeless rock like Mars.

In our next thought experiment, we shrink people to find out what life is like if you are just 5mm tall. We find out why small creatures have superpowers that seem to defy the laws of physics, meet Jyoti Amge, the world’s smallest woman, and with the help of Dr Diana Van Heemst and thousands of baseball players reveal why short people have longer lives.

Lastly, the Sun gets as small as a sun can be. We visit the fusion reactor at the Joint European Torus to find out why stars have to be a minimum size or fusion won’t happen. And if our Sun were that small? Plants would turn from green to black, and Earth would probably resemble a giant, frozen eyeball. Which all goes to show that size really does matter.

Hannah Fry is a British mathematician, author, lecturer, radio and television presenter, podcaster and public speaker. She studies the patterns of human behaviour, such as interpersonal relationships and dating, and how mathematics can apply to them. Fry delivered the 2019 Royal Institution Christmas Lectures.

Fry regularly appears on BBC Radio 4 in the UK, including in Computing Britain (2015, 12 episodes) and The Curious Cases of Rutherford & Fry (with Adam Rutherford), which aired its 17th series in 2020/21.

She has presented several BBC television programmes. In 2015, Fry presented a BBC Four film biography of Ada Lovelace. In 2016, she co-presented Trainspotting Live with Peter Snow, a three-part series about trains and trainspotting, for the same channel. In the BBC Two series City in the Sky Fry studied the logistics of aviation. She also hosted The Joy of Data on BBC Four, which examines the history and human impact of data. A further credit for 2016 was her co-hosting an episode of the BBC Two Horizon series with Dr Xand van Tulleken, titled “How to Find Love Online”. In 2017, Fry presented an episode of Horizon titled “10 Things You Need to Know About the Future”.

In 2018, she presented Contagion! The BBC Four Pandemic, about the possible impact of a flu pandemic, and Magic Numbers, also on BBC Four, a three-part series which explored mathematical concepts. She hosted a one-off 90-minute special of the BBC science programme Tomorrow’s World alongside four presenters from the show’s original run: Maggie Philbin, Howard Stableford, Judith Hann and Peter Snow.

In 2019, Fry presented a BBC Four programme titled A Day in the Life of Earth which explored how Earth changes in a single day and how these daily changes are essential to human existence. Fry also co-presented a Horizon episode titled “The Honest Supermarket”, which covered a range of issues, including expiration dates and their impact on food waste, microplastics in the human food supply and the impact food consumption has on the environment. She presented the 2019 edition of the Royal Institution Christmas Lectures, entitled “Secrets and lies”, on the hidden numbers, rules and patterns that control daily lives;the three lectures were broadcast on BBC Four.

In 2020, Fry co-presented both The Great British Intelligence Test and Coronavirus Special – Part 2 with Michael Mosley on BBC Two. She has presented further programmes for the BBC explaining the mathematics behind COVID-19 and related pandemics.

Size Matters episode 2: This two-part special presented by Hannah Fry shows that when it comes to the universe, size really does matter.

The Gene – An Intimate History episode 1

Hunt for the Missing Black Holes

Human Universe episode 3: Are We Alone?