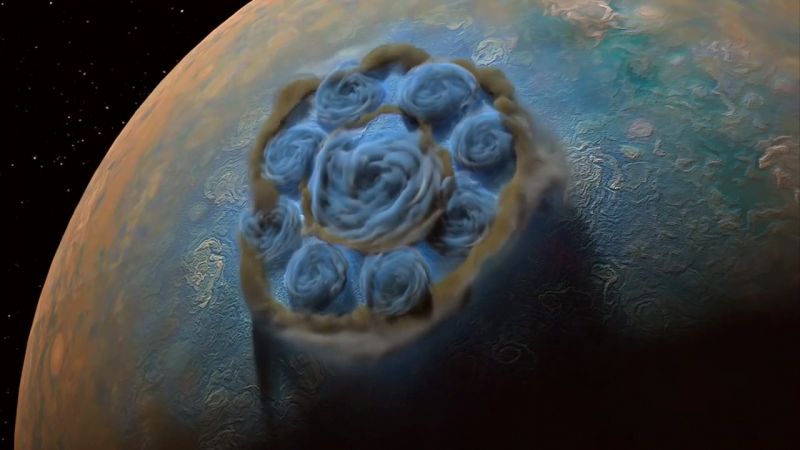 Alien Hell Storms: Jupiter, Saturn, Uranus, and Neptune are homes to the deadliest storms in our solar system, and new discoveries reveal the secrets of this hellish alien weather, helping experts understand these alien worlds better than ever.

The Great Red Spot is a persistent high-pressure region in the atmosphere of Jupiter, producing an anticyclonic storm, the largest in the Solar System, 22 degrees south of Jupiter’s equator. It has been continuously observed since 1830. Earlier observations from 1665 to 1713 are believed to be of the same storm; if this is correct, it has existed for at least 350 years. The Great Red Spot may have existed since before 1665, but the present spot was first seen only after 1830 and well-studied only after a prominent apparition in 1879. The storm that people had seen in the 1600s may have been a different storm from the one we see today.

On October 11, 2006, the Cassini-Huygens spacecraft took images of a storm with a well-defined distinct eyewall over the south pole of Saturn. It was 8,000 kilometres (5,000 mi) across, with storms in the eyewall reaching 70 km (40 mi) high. The storm had windspeeds of 550 km/h (340 mph) and appeared to be stationary over Saturn’s south pole. In addition, several storms like the Great White Spot occasionally appear on Saturn’s northern latitudes, becoming large enough to be spotted by telescopes on Earth every 28 and a half years.

There is also a long-lived storm known as the Dragon Storm, which flares occasionally on Saturn’s southern latitudes. A hexagonal cyclone in Saturn’s north pole has been spotted since the passage of Voyager 1 and 2, and was first imaged by Cassini on January 3, 2009. It is just under 15,000 miles (25,000 km) in diameter, with a depth of about 60 miles (100 km), and encircles the north pole of the ringed planet at roughly 78° N latitude

Alien Hell Storms: Jupiter, Saturn, Uranus, and Neptune are homes to the deadliest storms in our solar system, and new discoveries reveal the secrets.

Human Universe episode 5: What Is Our Future?

Dark Secrets of the Solar System