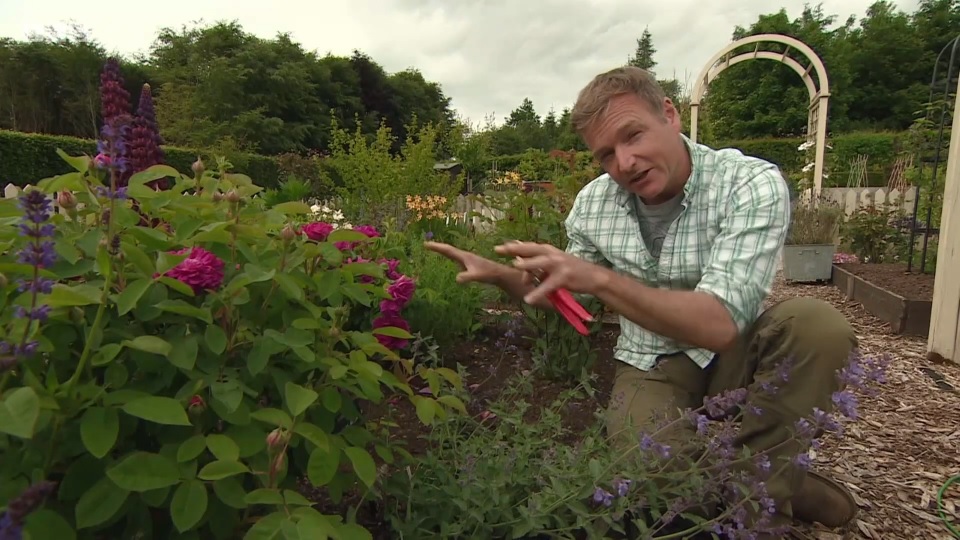 After being awarded both the coveted Chelsea ‘Best in Show’ and gold medal, Chris is back to Beechgrove Garden episode 10 2018 to tend to the rose garden. Meanwhile, Jim reviews the progress of his previously sickly houseplant collection.

Brian is creating a new natural feature to ebb and flow by Beechgrove’s waterfall using lady’s slipper orchids, which look exotic but turn out to be surprisingly easy to grow. Carole visits Richard and Ellen Firman’s wonderful, wildlife-friendly woodland garden near Ellon, Aberdeenshire, to marvel at their hosta collection.

Salvias and Other Planting Combinations

Jim was in the Exotic Border. A few weeks ago, nurseryman, Brian Young brought up a selection of salvias to plant at Beechgrove. ‘Amistad’ was planted in a large pot. It was looking beautiful now with its purple and black bracts and flowers and will grow to about 6ft in one season. WE are treating it as tender and therefore are growing under cover just to make sure.

Other salvia varieties were planted in the Exotic Border. They are half hardy so will be lifted before the first frosts and overwintered in the greenhouse. We can also take cuttings from them to make more plants.

Brian was at Beechgrove adding orchids and some alpines to the waterfall area at the pond side. The border on the other side of the steps came about when a viewer from the North East of England challenged the Beechgrove team to come up with an exotic border for northern climates. He firstly cleared the bank of ivy to see what was there.

He mixed leaf mould with grit in a 50/50 ratio and put this onto the cleared area as the plants there won’t require too much richness. Orchids have been chosen to look exotic and to mirror the exotics border including the very extravagant looking Lady’s Slipper Orchids. Although they certainly look exotic, these orchids used to be commonly seen and are native so they should work well in this situation. Brian also chose other plants to complement the orchids.

Chris was at a bed near the corner of the Main Pond. There used to be a Cryptomeria japonica here. Due to flooding it was very poorly so was removed a couple of years ago. In its place Chris wanted to use something evergreen and native so he planted up a copse of pines (Pinus nigra).

They have put on a lot of growth in the last 2 years and will eventually become far too big for this border, so it was time to decide what to do. He decided to steal some ideas from the Japanese art of Niwaki or cloud pruning. This would age the trees and make them appear older than the really are.

Chris is back to Beechgrove Garden episode 10 2018 to tend to the rose garden. Meanwhile, Jim reviews the progress of his previously sickly houseplant collection.