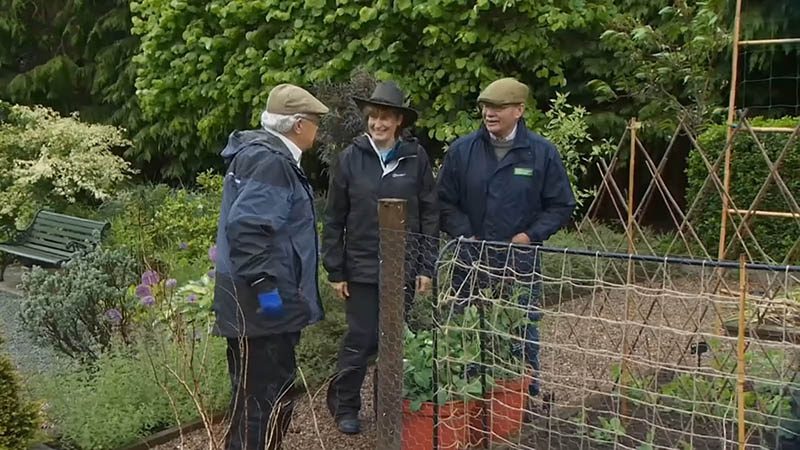 Continuing to trace the path of a gardener’s training, Jim visits Elmwood College in Cupar to find out about apprenticeships in the lovely college gardens. Carole visits the impressive Braco Castle garden in Stirlingshire, which features a range of rhododendrons that are designed to have a very long season of flowering.

This week back in his small space garden plot where the plan is to just grow leaves this season, George was harvesting some for a salad. At the seed sowing stage in April George had applied a base dressing of slow release fertiliser (Programme 2 07/04/2016) to the surface of the bed. This fertilizer consisted of potash,nitrogen and phosphate: the nitrogen was absorbed by the crops and encouraged leafy growth. Now that the first harvest has taken place it’s time to feed the soil again to improve further cropping.

On the Decking Garden, Carole, like George, was growing vegetables and ornamentals in a small space – this time in containers. She harvested some salad leaves including Lettuce ‘Navara’, an oak leaf variety, and baby leaves of rocket, mustard and spinach.

How to Grow a Gardener

This is the second part of Jim’s How to Grow a Gardener strand. Having decided at school that horticulture is what you want to do, where do you go to do it?  This week he visited SRUC Elmwood Campus, Cupar in Fife to find out about the modern apprenticeship schemes offered there.

Poor George, on an awful day like today he was in the Bog Garden which is being revamped this year. He was on a mission to save the Sarracenias. These are pitcher plants from North East America and were planted at Beechgrove in 2011and have romped away in the 5 years since they were planted. They needed to be potted up prior to work starting here.