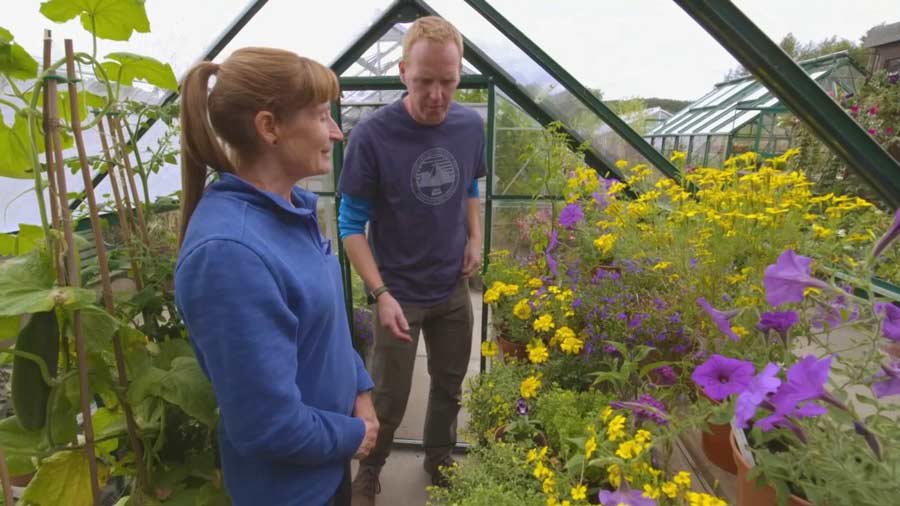 Lucy Dalgleish is a gardening and plant enthusiast on a high level, literally, as she gardens on her Maryhill balcony. Kirsty visits Lucy to help with her aim to grow overwinter vegetables and become self-sufficient from her bountiful balcony during the colder months.

Carole travels to Little Loch Broom in Wester Ross to visit the garden of Sue Pomeroy and Will Soos. Sue and Will have created a coastal garden full of plants from all around the world.

August is the perfect time of year for hedge cutting as birds have finished nesting in them, so won’t be disturbed, and growth has slowed down. Cutting now, tidies them up and gives the hedges a chance to recover and before
the winter ahead. George tackled the deciduous hornbeam hedge Carpinus betulus.

He used a cordless battery-operated hedge trimmer for the job. Any tool or piece of machinery with sharp blades requires health & safety considerations. George wore a hard-hat with a safety visor and ear protectors. He also wore gel safety gloves to minimise the risk of developing ‘vibration white finger’ which can be caused by operating machinery. Another safety feature George pointed out is that the hedge trimmer he was using is fitted with a ‘dead man’s handle’ which, if released, will stop the machine immediately.

Brian visited Carole’s 8×6 greenhouse. Carole is delighted about how her greenhouse has turned out this year. It is divided into 2 – a pretty side and a productive side. The blue and yellow colour theme worked well. On the productive side of Carole’s greenhouse, Tomato ‘Ruby Falls’, (which Brian has also grown this year) has only produced one ripe fruit so far. This was possibly due to the difficult growing season this year. Carole recommended it though because it grows in a narrow space.

The Beechgrove Garden episode 13 2019: from huge horn-beam to bijoux box, it's hedge-clipping time in Beechgrove.

Grow Your Own At Home With Alan Titchmarsh episode 3