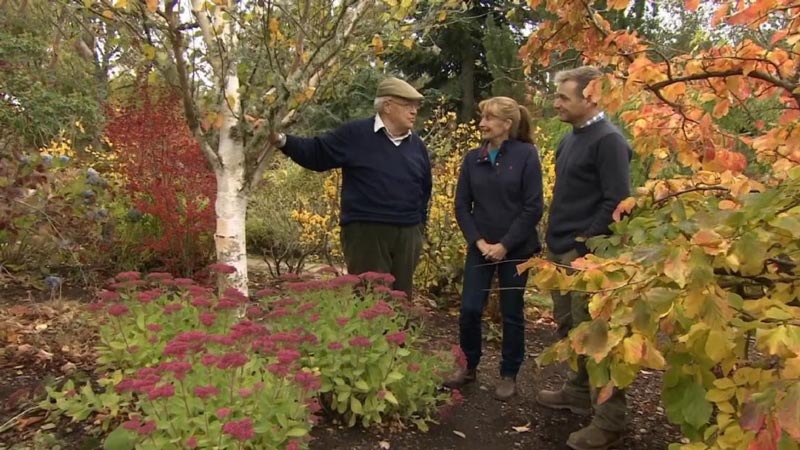 In the penultimate programme Beechgrove Garden episode 23 2018, Jim is cropping kale and looking forward to red brussels sprouts for Christmas, while Carole continues the succession by planting hardy garlic to crop early next year. Chris attempts to spread the colour interest in the rose garden by underplanting with some more unusual bulbs.

Meanwhile, Carole makes her last visit of the year to Tap o’ Noth permaculture farm near Rhynie to see the last of the harvest and takes a look at the worm farm. George visits the magnificent Dawyck Botanic Gardens near Peebles to see the garden’s autumn show and is taken on a fungi foray through the woodlands.

It’s been 4 weeks since Jim planted overwintering veg in the polytunnel and outside in the raised beds. They are all looking pretty healthy and some of the salad crops especially the rocket and parsley were already big enough for picking. We grew some ‘Softneck’ garlic earlier in the year. Some were planted outside without protection and some were grown under a fleece. Carole predicted the protected ones would do much better but the opposite was the case. The varieties ‘Mersley Wight’ and Tuscany Wight’ did particularly well. Soft necks (Allium sativum var. sativum) are the best ones to grow if you live in a milder climate.

Planting bulbs in the Rose Garden

In the Rose Garden this is only the first season of the herbaceous perennials being planted and they are starting to knit together. However, we need to have a bit more of a balance and another layer for next year. The perennials and roses won’t be in flower until summer, so the gap needs to be filled with something pretty between April and June. Chris has chosen a range of spring bulbs which will provide colour early in the season. First up he has selected Allium ‘Silver Spring’ which has white flowers with lovely pink eyes in the centre, and they will do well in this open, dry and sunny spot. Its height is around 40-45 cm tall.

In the penultimate programme Beechgrove Garden episode 23 2018, Jim is cropping kale and looking forward to red brussels sprouts for Christmas