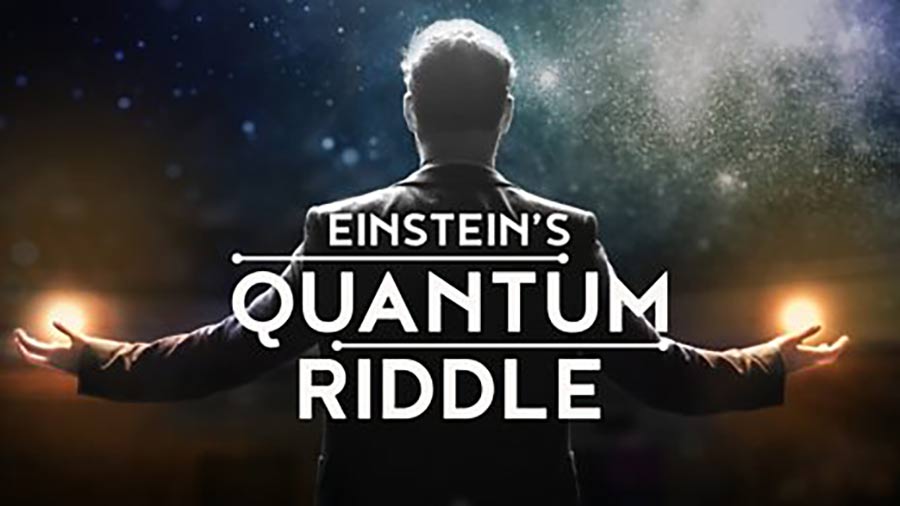 At the start of the 20th century Albert Einstein helped usher in quantum mechanics – a revolutionary description of the behaviour of tiny particles. But he soon became uncomfortable with the counter intuitive ideas at the heart of the theory. He hunted for flaws in the equations and eventually discovered that they predicted a seemingly impossible situation.

Quantum theory suggested you could have two particles, which had interacted in the past, and even if you separated them by millions of miles they would somehow act in unison. If you measured one, forcing it to take on one of many properties, the other would instantly take on a corresponding property. Like rolling two dice, millions of miles apart, and as you look at one to see what number it landed on, the other instantly shows the same number. This bizarre prediction of magically connected particles became known as quantum entanglement. Einstein felt it couldn’t possibly be real – it seemed to break the rules of space and time. In 1935, with two of his colleagues, he published a paper that argued that this bizarre phenomenon implied the equations of quantum theory must be incomplete.

No-one could think of a way to test whether Einstein was right, until in 1964, John Bell, a physicist form Northern Ireland, published an astonishing paper. He’d found a key difference between Einstein’s ideas and those of quantum theory. It all boiled down to entanglement. As Professor David Kaiser puts it: ‘We now know this was one of the most significant articles in the history of physics. Not just the history of 20th-century physics; in the history of the field as a whole.’ In 1972 John Clauser and Stuart Freedman built an experiment based on John Bell’s work and found the first experimental evidence to suggest that quantum entanglement really is a part of the natural world.

Today, a technological revolution is under way, with labs around the world harnessing entanglement to create powerful new technologies such as quantum computers. At Google’s quantum computing lab in Santa Barbara, researcher Marissa Giustina describes their latest quantum-processing chip. And in Shanghai, at the University of Science and Technology, Professor Jian-Wei Pan explains that his team is working to send entangled particles from a satellite to a ground station to create totally secure communication links – a major step towards the creation of an unhackable ‘quantum internet’ of the future based on quantum entanglement.

Yet despite this progress, questions still remain about our experimental proof of entanglement. There are possible loopholes that could mean that entanglement may be an illusion and that Einstein was right all along. At the Roque de los Muchachos Observatory in the Canary Islands, Professor Anton Zeilinger’s team is attempting a remarkable experiment to rule out the most challenging loophole. Their experiment uses two of Europe’s largest telescopes to collect light from two quasars, billions of light years away, to control intricate measurements of tiny quantum particles and put quantum entanglement to the ultimate test.

Quantum entanglement is a label for the observed physical phenomenon that occurs when a pair or group of particles is generated, interact, or share spatial proximity in a way such that the quantum state of each particle of the pair or group cannot be described independently of the state of the others, even when the particles are separated by a large distance. The topic of quantum entanglement is at the heart of the disparity between classical and quantum physics.

Measurements of physical properties such as position, momentum, spin, and polarization, performed on entangled particles are found to be perfectly correlated. For example, if a pair of entangled particles is generated such that their total spin is known to be zero, and one particle is found to have clockwise spin on a first axis, then the spin of the other particle, measured on the same axis, will be found to be counterclockwise. However, this behavior gives rise to seemingly paradoxical effects: any measurement of a property of a particle results in an irreversible wave function collapse of that particle and will change the original quantum state. In the case of entangled particles, such a measurement will affect the entangled system as a whole.

The Story of Science episode 5 – What Is the Secret of Life?

The Sky at Night – The Mystery of Oumuamua