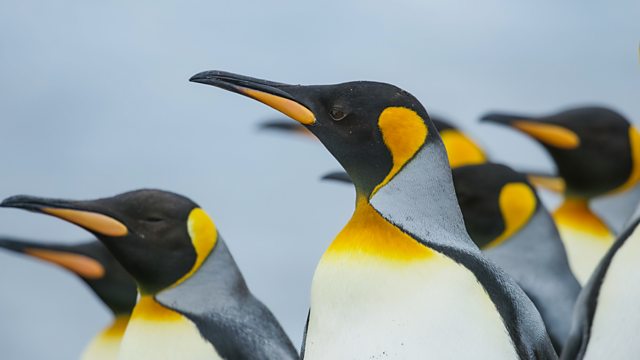 Frozen South: Antarctica is the most hostile of all earth’s frozen worlds. Yet even here, amongst some of the most challenging conditions on the planet, life finds a way not just to survive, but thrive. Our journey begins at the far edge of the continent, on its far-flung sub-Antarctic islands. Here we meet king penguins that, to feed at sea, must face the danger of ferocious leopard seals lurking in the shallows. On another island, we witness for the first time male Antipodean wandering albatross partnering up with each other as the females in their population are disappearing due to fishing activity.

Heading towards the continent of Antarctica, we traverse the roughest seas on earth – the Southern Ocean – where we find the rarely filmed Antarctic blue whale, the largest animal to have ever lived. At the edge of Antarctica, the sea is so cold that it freezes over, creating a vital ice platform for a mother Weddell seal to raise her precious pup. Still, she needs to protect him from aggressive males.

In spring, the coast of Antarctica is free of snow, drawing in thousands of breeding chinstrap penguins. Stones are at a premium to build their elevated nests and protect chicks from meltwater. But stealing is commonplace, and to make matters worse, with climate change we find chicks today shivering with hypothermia – a warming Antarctica means increased meltwater. Other residents are facing an uncertain future too, including wave-washing killer whales. We discover that their favourite prey, Weddell seals, are now harder to reach, so instead they are resorting to targeting much more feisty prey, including leopard seals, an apex predator in its own right. This dramatic encounter has never been filmed before.

Travelling into the interior of the continent – into the frozen heart of Antarctica – we find great surprises. This is one of the most volcanic regions on earth, and one of the driest. We reveal unexpected sand dunes, hidden in a rare ice-free valley. Then, on the exposed mountain tops, sticking out from the otherwise ice-covered interior, we find tiny snow petrels, which raise their chicks further south than any other bird, and defend their territory by projectile vomiting!

The greatest revelation lies deep in the interior, beneath the surface of an ice-covered lake, where we discover ancient alien-like structures – giant stromatolites – built by primitive lifeforms. If life can make it here, in the extremes of Antarctica, it raises the possibility that life can exist elsewhere, including in the frozen lakes of distant planets.

Frozen South: Antarctica is the most hostile of all earth’s frozen worlds. Yet even here, life finds a way not just to survive, but thrive.