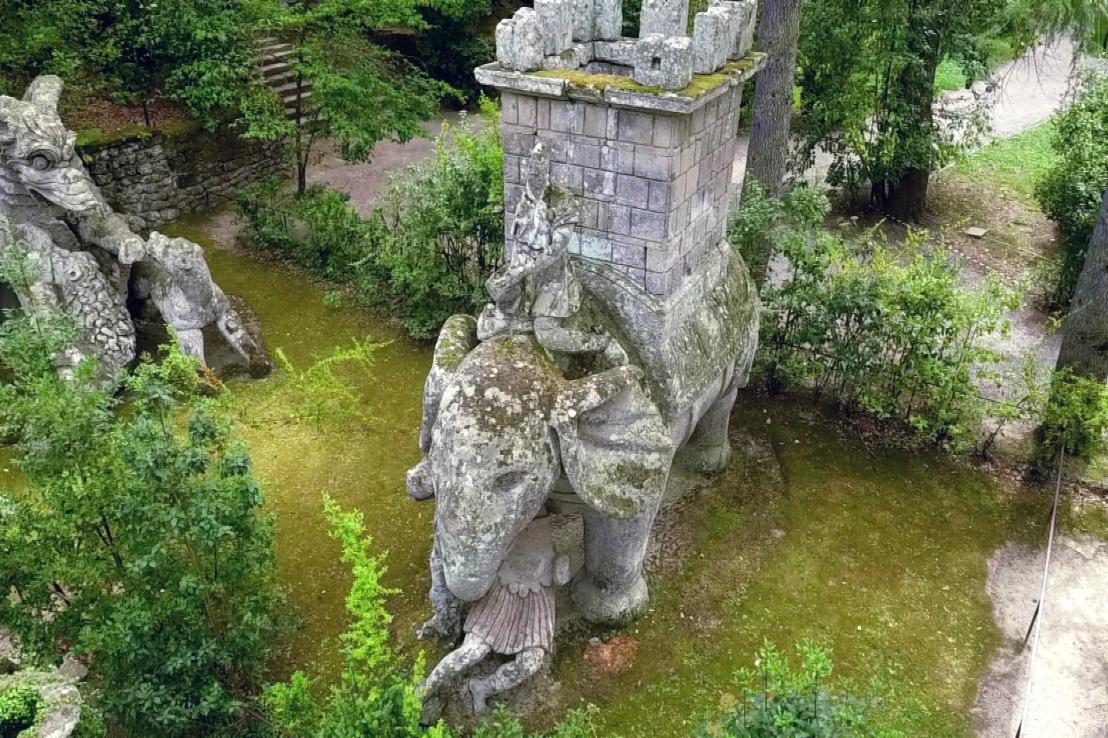 Gardens Near and Far episode 42 – Sacro Bosco:  The Sacred Grove, a mysterious garden to the North East of Rome, was created in the 1550s by Vicino Orsini, Lord of Bomarzo, who worked on beautifying it until his death in 1584.

He drew inspiration from the Etruscan civilisation but in a style that was closer to Mannerism, a trend at the end of the Italian Renaissance that refused the traditional rules of harmony and imitation of nature. After Vicino Orsini’s death, the garden was abandoned for nearly 350 years. In the mid 20th century it was rediscovered, thanks in particular to Salvador Dali. Still today, Sacro Bosco remains a source of inspiration for artists.

The park of Bomarzo was intended not to please, but to astonish, and like many Mannerist works of art, its symbolism is arcane: examples are a large sculpture of one of Hannibal’s war elephants, which mangles a Roman legionary, or the statue of Ceres lounging on the bare ground, with a vase of verdure perched on her head.

The many monstrous statues appear to be unconnected to any rational plan, and appear to have been strewn almost randomly about the area, sol per sfogare il Core (“just to set the heart free”) as one inscription in the obelisks says. Allusive verses in Italian by Annibal Caro (the first one is of him, in 1564), Bitussi, and Cristoforo Madruzzo, some of them now eroded, were inscribed beside the sculptures.

The reason for the layout and design of the garden is largely unknown; Liane Lefaivre thinks they are illustrations of the romance novel Hypnertomachia Poliphili. Perhaps they were meant as a foil to the perfect symmetry and layout of the great Renaissance gardens nearby at Villa Farnese, and Villa Lante. Next to a formal exit gate is a tilting watchtower-like casina, the so-called Casa Pendente (“Leaning House”).

Gardens Near and Far episode 42 – Sacro Bosco:  The Sacred Grove, a mysterious garden to the North East of Rome, was created in the 1550s by Vicino Orsini