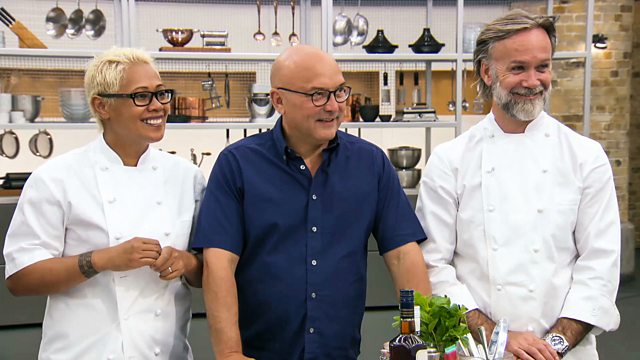 It’s the finals on MasterChef episode 20: The Professionals and the tension is palpable with the finish line in sight. After six weeks of intense culinary battles, four exceptionally talented chefs remain from the original 48. The chefs need to reach new stellar heights to sway the judges, Gregg Wallace, Monica Galetti and Marcus Wareing. Only one chef can be crowned MasterChef: The Professionals Champion of 2018.

In tonight’s penultimate challenge, the four remaining chefs fight to secure their place amongst the final three, and the chance to take the opportunity of a lifetime to travel to one of the world’s most legendary Michelin-starred restaurants. First, they must face a cook-off against each other in the MasterChef kitchen. For one chef, this will be the end of their journey, as only three can take the next step – being sent to Valence in France, to learn from three Michelin starred Chef Anne Sophie Pic, at Restaurant Pic.

The judges begin by setting the four finalists a simple brief in the MasterChef kitchen -creating a single exceptional and evocative dish which draws inspiration from a place that is special to them. In 90 minutes they must go all-out to cook the dish of their professional lives. At this point in the competition, there’s nowhere to hide from the judge’s scrutiny and one finalist will be sent home.

The remaining three finalists then travel to Valence, in France. Anne Sophie Pic is one of the World’s leading chefs, she comes from a stellar lineage of chefs and is the fourth generation, the third generation to have won three Michelin Stars. Her family have been in every Michelin Guide since it began. Initially Pic didn’t want to follow in the family footsteps and instead pursued a career in business in New York and Japan. Aged 23, Pic was drawn to return to France and train with her father to become a chef, Anne Sophie Pic has since had a culinary career spanning 26 years.

During this time she has won three Michelin Stars, been awarded the Legion of Honour, won further Michelin stars in two more countries and been named the World’s Best Female Chef. Her cuisine and career not only reflects the generations of gastronomic genius that went before her but has been taken on to new heights, pushing boundaries and creating a cuisine unique to her.

The three finalists will now have the ground breaking opportunity to learn from Anne Sophie Pic and her elite team. First they are given an inspiring masterclass about the secrets of her cuisine and her food philosophy. The chefs are then asked to draw on this lesson to create their own dish for Pic to taste. They are given the freedom to explore Anne Sophie Pic’s herb garden for ingredients and inspiration. They must show that they can translate her philosophy and her unique approach to flavour, aroma and balance and deliver one dish worthy of this three-star chef.

After this challenge, in the biggest test of their professional careers, the three finalists must seamlessly join Pic’s brigade of chefs during a packed lunchtime service. The pressure intensifies as they’re tasked with creating two exceptional dishes each, in a six-course menu for the exacting restaurant diners. As well as impressing Anne Sophie Pic and her team, their dishes will face the judgement of Marcus, Monica and Gregg who have joined the guests. This service will test the three finalists like never before.

This will be the most terrifying and demanding service the chefs have ever faced and they can’t afford to falter for a second, but the rewards could be great. They must return with the inspiration to push themselves right to the top – with the ultimate goal being to take home the title of
MasterChef: The Professionals 2018.

It's the finals on MasterChef episode 20: The Professionals and the tension is palpable with the finish line in sight.