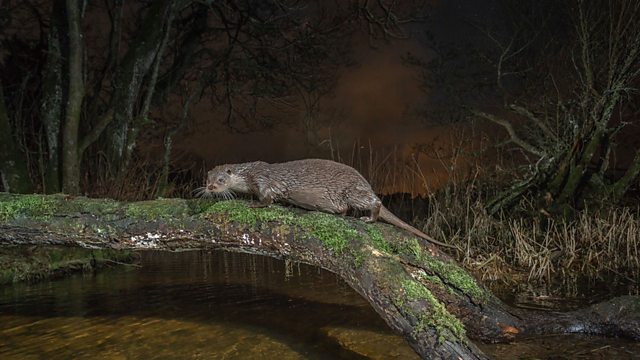 Winterwatch 2021 episode 6: In this episode, Winterwatch looks at wonderful warming winter gatherings. Everyone comes together in the winter – and so do the animals.

Chris Packham will be live in the New Forest to look at what’s been happening in the badger sett in the New Forest – as well as the latest action from the River Ness. Iolo Williams is looking at otters at CAT in Wales and how more otters are being encouraged to come to the site through the construction of holts.

There are more winter wildlife reports from Gillian Burke down in Cornwall, and in the second of a four part look by Megan McCubbin at species that we don’t love as much as we should, she swims with jellyfish in a bid to understand why they are misunderstood.

We’re also with actor and keen birder Sam West as he teams up with sound recordist Gary Moore at RSPB Minsmere to better understand the sounds of our winter birds.

The River Ness (Scottish Gaelic: Abhainn Nis) is a river about 6 miles (10 kilometres) long, which flows from the northern end of Loch Ness in Scotland, through Loch Dochfour, north-east to Inverness, with a total fall in height of about 16 metres (52 feet) before discharging into the Beauly Firth. The river is the origin of the name of Inverness which is from Scottish Gaelic: Inbhir Nis, meaning “Mouth of the Ness”.

Upstream of Inverness city centre lie the Ness Islands which are popular for nature walks and have many fine tree specimens. The river flows through the heart of the City of Inverness, and fishermen in waders can often be seen casting for salmon. The Ness District Salmon Fishery Board is the statutory body responsible for the protection and enhancement of salmon and sea trout fisheries in the Ness District.

Common seals and grey seals are often seen, as are grey heron, pipistrelle and Daubenton’s bats, housemartins, grey wagtail, great black backed gull, European herring gull, oystercatchers, mallards, dippers, goosander and other diving birds. At certain times of the year Arctic terns can be seen lining the railings along the river banks and rarely eagle owl have been seen and the occasional osprey has been spotted fishing in the river from the Ness Islands. European otter are sometimes spotted. The banks of the river are lined with lime trees.

Winterwatch 2021 episode 6: looks at wonderful warming winter gatherings. Everyone comes together in the winter – and so do the animals.

Rise of the Continents episode 4 – Eurasia