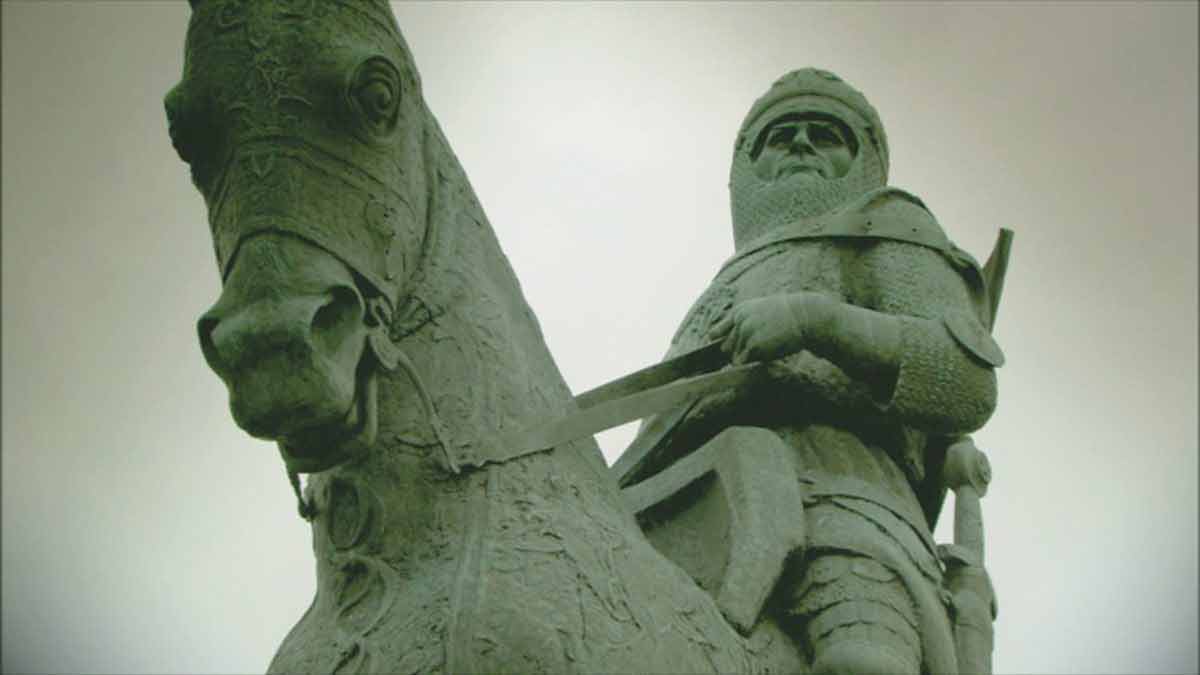 Robert Bruce’s 22-year struggle to secure Scottish independence is one of the most important chapters in the country’s history. Neil Oliver explores the crucial role the Scottish church played in promoting the cause of Robert Bruce, how they launched repeated propaganda campaigns, both at home and abroad, and how the famous 1320 Declaration of Arbroath ultimately persuaded the Pope to finally recognise Scotland as an independent nation.

The Declaration of Arbroath is a declaration of Scottish independence, made in 1320. It is in the form of a letter in Latin submitted to Pope John XXII, dated 6 April 1320, intended to confirm Scotland’s status as an independent, sovereign state and defending Scotland’s right to use military action when unjustly attacked.

Generally believed to have been written in the Arbroath Abbey by Bernard of Kilwinning, then Chancellor of Scotland and Abbot of Arbroath, and sealed by fifty-one magnates and nobles, the letter is the sole survivor of three created at the time. The others were a letter from the King of Scots, Robert I, and a letter from four Scottish bishops which all made similar points.

The Declaration was part of a broader diplomatic campaign, which sought to assert Scotland’s position as an independent kingdom, rather than its being a feudal land controlled by England’s Norman kings, as well as lift the excommunication of Robert the Bruce. The pope had recognised Edward I of England’s claim to overlordship of Scotland in 1305 and Bruce was excommunicated by the Pope for murdering John Comyn before the altar in Greyfriars Church in Dumfries in 1306.

Scottish independence is the political movement for Scotland to become a sovereign state, independent from the United Kingdom.

Scotland was an independent kingdom through the Middle Ages, having won wars of independence against England. The two kingdoms were joined in personal union in 1603 when the Scottish King James VI became King James I of England, and the two kingdoms united politically in 1707. Political campaigns for Scottish self-government began in the nineteenth century, initially in the form of demands for home rule within the United Kingdom. Two referendums on devolution were held in the latter part of 1997, with a devolved Scottish Parliament being established on 1 July 1999.

Robert I (11 July 1274 – 7 June 1329), popularly known as Robert the Bruce, was King of Scotland from 1306 until his death in 1329. He was one of the most famous warriors of his generation, and eventually led Scotland during the First War of Scottish Independence against England. He fought successfully during his reign to regain Scotland’s place as an independent country and is today revered in Scotland as a national hero.

His paternal fourth great-grandfather was King David I. Robert’s grandfather, Robert de Brus, 5th Lord of Annandale, was one of the claimants to the Scottish throne during the “Great Cause”. As Earl of Carrick, Robert the Bruce supported his family’s claim to the Scottish throne and took part in William Wallace’s revolt against Edward I of England.

Appointed in 1298 as a Guardian of Scotland alongside his chief rival for the throne, John III Comyn, Lord of Badenoch, and William Lamberton, Bishop of St Andrews, Robert later resigned in 1300 due to his quarrels with Comyn and the apparently imminent restoration of John Balliol to the Scottish throne. After submitting to Edward I in 1302 and returning to “the king’s peace”, Robert inherited his family’s claim to the Scottish throne upon his father’s death.

A History of Ancient Britain episode 3