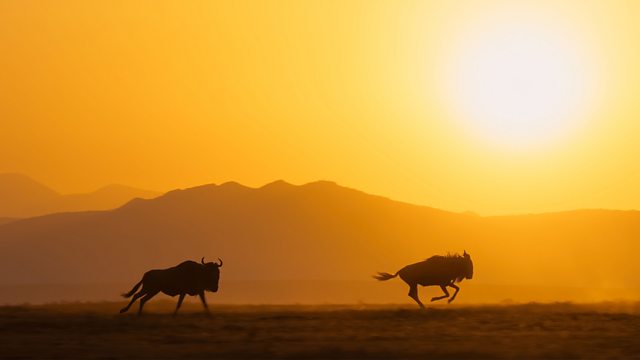 A Perfect Planet episode 2 - The Sun

A Perfect Planet episode 2 – The Sun: From the frozen poles to the searing deserts, this episode shows how animals have come up with strategies to survive the uneven amounts of sunlight that fall on our planet.

A Perfect Planet episode 2 – The Sun

The Saharan silver ant is a species of insect that lives in the Sahara Desert. It is the fastest of the world’s 12,000 known ant species, clocking a blistering velocity of 855 millimetres per second (nearly 1 m/s or 3.6 km/h). It can travel a length 108 times its own body length per second, a feat topped only by two other creatures, the Australian tiger beetle Cicindela eburneola and the California coastal mite Paratarsotomus macropalpis. This is nearly the walking pace of a human being, and compared to its body size would correspond to a speed of about 200 m/s (720 km/h) for a 180 cm (6 ft) tall human runner.

Largely due to the extreme high temperatures of their habitat, but also due to the threat of predators, the ants are active outside their nest for only about ten minutes per day. The twin pressures of predation and temperature restrict their above-ground activity to within a narrow temperature band between that at which predatory lizards cease activity and the ants’ own upper threshold.

The ants often traverse midday temperatures around 47 degrees Celsius (117 degrees Fahrenheit) to scavenge corpses of heat-stricken animals. To cope with such high temperatures, the ants have several unique adaptations.

The Sahara is a desert on the African continent. With an area of 9,200,000 square kilometres (3,600,000 sq mi), it is the largest hot desert in the world and the third largest desert overall, smaller only than the deserts of Antarctica and the Arctic. The name ‘Sahara’ is derived from the Arabic word for “desert”, ṣaḥra.

The desert comprises much of North Africa, excluding the fertile region on the Mediterranean Sea coast, the Atlas Mountains of the Maghreb, and the Nile Valley in Egypt and Sudan. It stretches from the Red Sea in the east and the Mediterranean in the north to the Atlantic Ocean in the west, where the landscape gradually changes from desert to coastal plains. To the south, it is bounded by the Sahel, a belt of semi-arid tropical savanna around the Niger River valley and the Sudan Region of Sub-Saharan Africa. The Sahara can be divided into several regions, including the western Sahara, the central Ahaggar Mountains, the Tibesti Mountains, the Aïr Mountains, the Ténéré desert, and the Libyan Desert.

For several hundred thousand years, the Sahara has alternated between desert and savanna grassland in a 20,000 year cycle caused by the precession of the Earth’s axis as it rotates around the Sun, which changes the location of the North African Monsoon. The area is next expected to become green in about 15,000 years (17,000 CE).

The Arctic wolf (Canis lupus arctos), also known as the white wolf or polar wolf, is a subspecies of grey wolf native to Canada’s Queen Elizabeth Islands, from Melville Island to Ellesmere Island. It is a medium-sized subspecies, distinguished from the northwestern wolf by its smaller size, its whiter colouration, its narrower braincase, and larger carnassials. Since 1930, there has been a progressive reduction in size in Arctic wolf skulls, which is likely the result of wolf-dog hybridization.

In 1935, the British zoologist Reginald Pocock attributed the subspecies name Canis lupus arctos (Arctic wolf) to a specimen from Melville Island in the Queen Elizabeth Islands, Canada. He wrote that similar wolves could be found on Ellesmere Island. He also attributed the name Canis lupus orion to a Greenland wolf specimen from Cape York, northwest Greenland. Both wolves are recognized as separate subspecies of Canis lupus in the taxonomic authority Mammal Species of the World (2005).

Ellesmere Island is part of the Qikiqtaaluk Region in the Canadian territory of Nunavut. Lying within the Arctic Archipelago, it is considered part of the Queen Elizabeth Islands, with Cape Columbia being the most northerly point of land in Canada. (The most northerly point of land on Earth is the nearby Kaffeklubben Island in Greenland). It comprises an area of 196,235 km2 (75,767 sq mi) and the total length of the island is 830 km (520 mi), making it the world’s tenth largest island and Canada’s third largest island. The Arctic Cordillera mountain system covers much of Ellesmere Island, making it the most mountainous in the Arctic Archipelago. The Arctic willow is the only woody species to grow on Ellesmere Island

A Perfect Planet episode 2 - how animals have come up with strategies to survive the uneven amounts of sunlight that fall on our planet.

Metamorphosis – The Science of Change