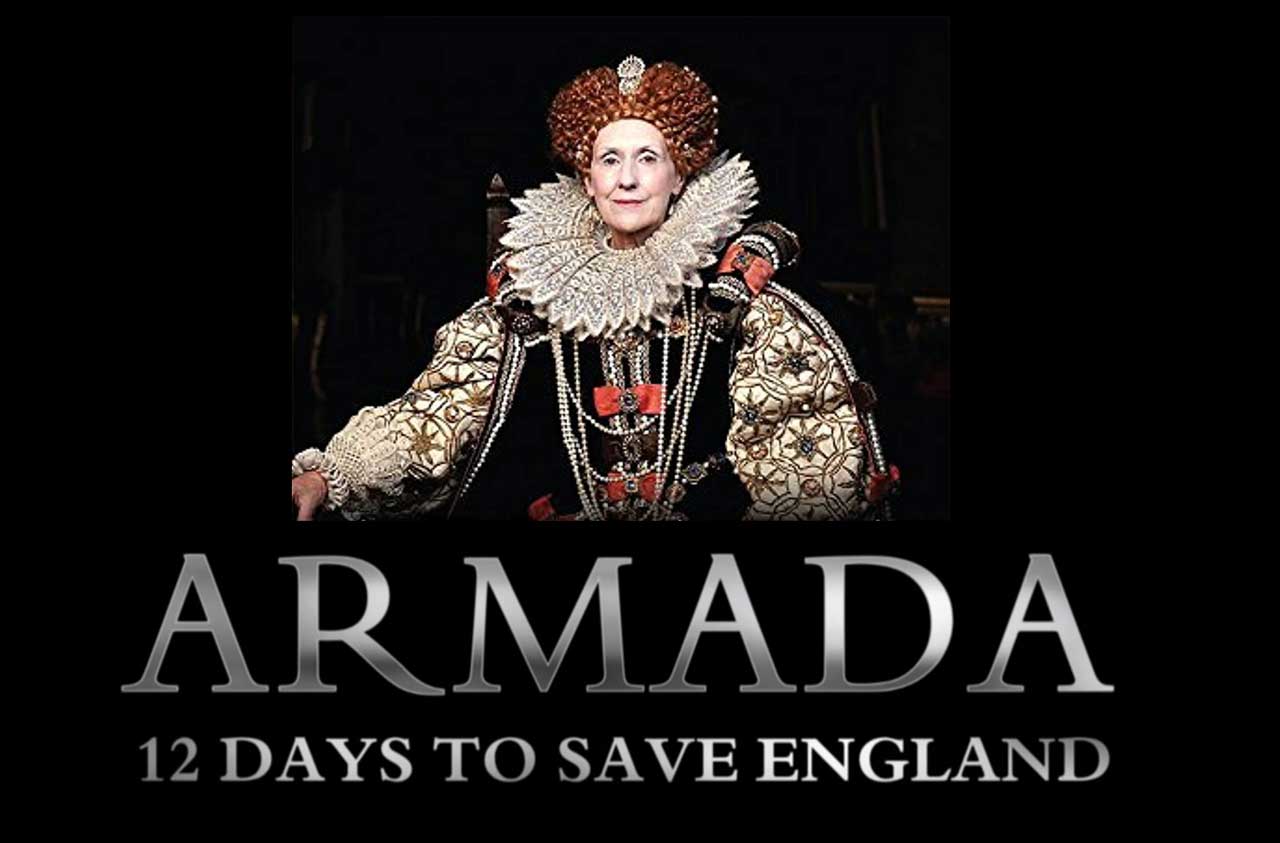 Armada: 12 Days to Save England episode 1

Armada: 12 Days to Save England episode 1 – In the first part of a major three-part drama documentary series, Anita Dobson stars as Elizabeth I, and Dan Snow takes to the sea to tell the story of how England came within a whisker of disaster in summer 1588. Newly discovered documents take us right inside the Spanish Armada for the very first time and reveal a missed opportunity that could have spelled the end of Tudor England.

Three-part documentary about the sinking of the Spanish Armada, featuring dramatic reconstructions and information gleaned from recently recovered documents. Dan Snow boards a yacht on the English channel to get a sense of the naval battle, revealing how tensions between England and Spain were fuelled by religion, piracy and Elizabeth I’s rejection of King Philip II of Spain as a suitor 30 years earlier, and how a missed opportunity could have resulted in disaster.

Armada: 12 Days to Save England episode 1

The Spanish Armada was a Spanish fleet of 130 ships that sailed from Lisbon in late May 1588 under the command of the Duke of Medina Sidonia, with the purpose of escorting an army from Flanders to invade England. Medina Sidonia was an aristocrat without naval command experience but was made commander by King Philip II. The aim was to overthrow Queen Elizabeth I and her establishment of Protestantism in England, to stop English interference in the Spanish Netherlands, and to stop the harm caused by English and Dutch privateering ships that disrupted Spanish interests in the Americas.

English ships sailed from Plymouth to attack the Armada. They were faster and more manoeuvrable than the larger Spanish galleons, enabling them to fire on the Armada without loss as the Armada sailed east off the south coast of England. The Armada could have anchored in The Solent between the Isle of Wight and the English mainland and occupied the Isle of Wight, but Medina Sidonia was under orders from King Philip II to meet up with Alexander Farnese, Duke of Parma’s forces in the Netherlands so England could be invaded by Parma’s soldiers and other soldiers carried in ships of the Armada. English guns damaged the Armada, and a Spanish ship was captured by Sir Francis Drake in the English Channel.

Elizabeth I was Queen of England and Ireland from 17 November 1558 until her death in 1603. Sometimes referred to as the Virgin Queen, Elizabeth was the last of the five monarchs of the House of Tudor.

Elizabeth was the daughter of Henry VIII and Anne Boleyn, his second wife, who was executed when Elizabeth was 21⁄2 years old. Anne’s marriage to Henry was annulled, and Elizabeth was declared illegitimate. Her half-brother Edward VI ruled until his death in 1553, bequeathing the crown to Lady Jane Grey and ignoring the claims of his two half-sisters, the Roman Catholic Mary and the younger Elizabeth, in spite of statute law to the contrary. Edward’s will was set aside and Mary became queen, deposing Lady Jane Grey. During Mary’s reign, Elizabeth was imprisoned for nearly a year on suspicion of supporting Protestant rebels.

Upon her half-sister’s death in 1558, Elizabeth succeeded to the throne and set out to rule by good counsel. She depended heavily on a group of trusted advisers led by William Cecil, whom she created 1st Baron Burghley. One of her first actions as queen was the establishment of an English Protestant church, of which she became the supreme governor. This Elizabethan Religious Settlement was to evolve into the Church of England. It was expected that Elizabeth would marry and produce an heir; however, despite numerous courtships, she never did. She was eventually succeeded by her first cousin twice removed, James VI of Scotland; this laid the foundation for the Kingdom of Great Britain. She had earlier been reluctantly responsible for the imprisonment and execution of James’s mother, Mary, Queen of Scots.

Armada: 12 Days to Save England episode 1 - Dan Snow takes to the sea to tell the story of how England came within a whisker of disaster in summer 1588.