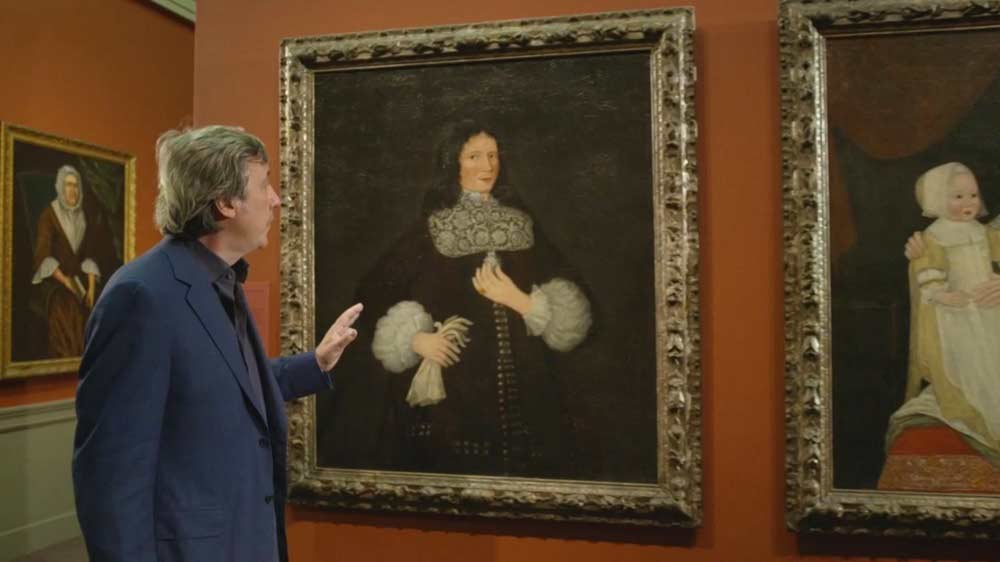 In Art of America episode 1 of a series exploring the history of American art, Andrew Graham-Dixon embarks on an epic journey from east to west, following in the footsteps of the pioneers who built the foundations of modern America.

During his journey, he travels to Massachusetts to see the earliest portraits in America depicting the Puritan settlers and visits Pennsylvania to uncover the dark truth behind Benjamin West’s most famous painting, the spectacular Treaty of Penn with the Indians. In Philadelphia, he turns the pages of one of the world’s most expensive books – John James Audubon’s exquisite Birds of America, and explores the wilderness that inspired America’s greatest landscape painter, Thomas Cole.

He also uncovers the paradox at the heart of America: that progress and innovation have come at a tragic price, the destruction of the unique cultural heritage of Native Americans by European settlers. Andrew’s journey takes us to the end of the 19th century and the announcement that the era of westward expansion was officially over.

Benjamin West PRA (1738 – 1820) was a British North American history painter around and after the time of the American War of Independence and the Seven Years’ War. West was the second president of the Royal Academy in London, serving from 1792 to 1805 and 1806 to 1820. He was offered a knighthood by the British Crown, but declined it, believing that he should instead be made a peer. He said that “Art is the representation of human beauty, ideally perfect in design, graceful and noble in attitude.”

Thomas Cole (1801 – 1848) was an English-born American painter known for his landscape and history paintings. One of the major 19th-century American painters, he is regarded as the founder of the Hudson River School, an American art movement that flourished in the mid-19th century. Cole’s work is known for its romantic portrayal of the American wilderness.

In Art of America episode 1 of a series exploring the history of American art, Andrew Graham-Dixon embarks on an epic journey from east to west.

The Riviera – A History in Pictures