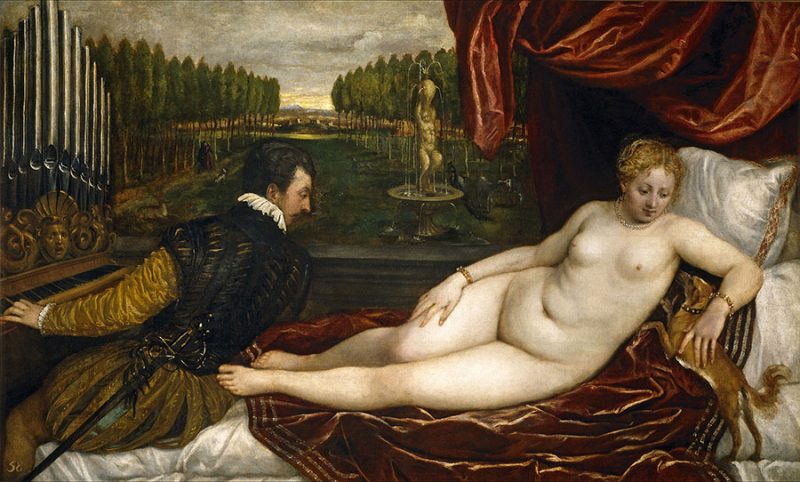 Titian genius and significance in European art are undisputed. Trained at the Giovanni Bellini workshop and influenced by working together with Giorgione, he came to a masterly use of colour, light and shade.

His oeuvre contains everything his times demanded: drama, carnal lust, religious fervour, mythology and portraits. Didier Baussy-Oulianoff takes us to the places where the renaissance artist devised his works and worked for the most influential courts. Contemporaries of Titian , such as Vasari and Aretino, also get a look in and we see that, in addition to being a gifted portrait-painter, Titian was also a skilled businessman.

Recognized by his contemporaries as “The Sun Amidst Small Stars” (recalling the famous final line of Dante’s Paradiso), Titian was one of the most versatile of Italian painters, equally adept with portraits, landscape backgrounds, and mythological and religious subjects. His painting methods, particularly in the application and use of colour, would exercise a profound influence not only on painters of the Italian Renaissance, but on future generations of Western art.

His career was successful from the start, and he became sought after by patrons, initially from Venice and its possessions, then joined by the north Italian princes, and finally the Habsburgs and papacy.

During the course of his long life, Titian artistic manner changed drastically, but he retained a lifelong interest in colour. Although his mature works may not contain the vivid, luminous tints of his early pieces, their loose brushwork and subtlety of tone are without precedent in the history of Western painting.

During the last twenty-six years of his life (1550–1576), Titian worked mainly for Philip II and as a portrait-painter. He became more self-critical, an insatiable perfectionist, keeping some pictures in his studio for ten years—returning to them and retouching them, constantly adding new expressions at once more refined, concise, and subtle. He also finished many copies that his pupils made of his earlier works. This caused problems of attribution and priority among versions of his works—which were also widely copied and faked outside his studio during his lifetime and afterwards.

Titian was trained at the Giovanni Bellini workshop and influenced by working together with Giorgione, he came to a masterly use of colour, light and shade.