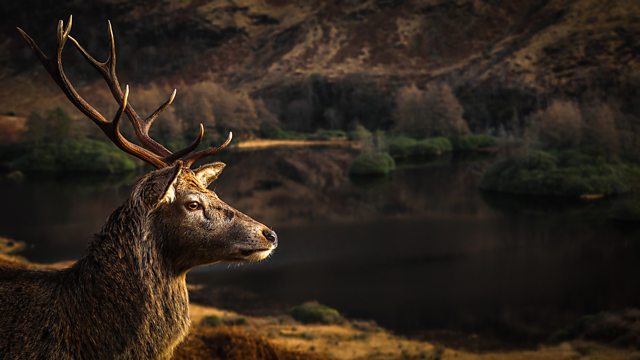 It is Halloween so time to reveal the wild secrets of Troll Mountain on the Island of Rum. Chris reveals the surprising science inside an antler and the team go hunting for Britain’s biggest spider.

Rùm (/rʌm/ (About this soundlisten); Scottish Gaelic pronunciation: [rˠuːm]), a Scottish Gaelic name often anglicised to Rum, is one of the Small Isles of the Inner Hebrides, in the district of Lochaber, Scotland. For much of the 20th century the name became Rhum, a spelling invented by the former owner, Sir George Bullough, because he did not relish the idea of having the title “Laird of Rum”.

It is the largest of the Small Isles, and the 15th largest Scottish island, but is inhabited by only about thirty or so people, all of whom live in the hamlet of Kinloch on the east coast. The island has been inhabited since the 8th millennium BC and provides some of the earliest known evidence of human occupation in Scotland. The early Celtic and Norse settlers left only a few written accounts and artefacts. From the 12th to 13th centuries on, the island was held by various clans including the MacLeans of Coll. The population grew to over 400 by the late 18th century but was cleared of its indigenous population between 1826 and 1828. The island then became a sporting estate, the exotic Kinloch Castle being constructed by the Bulloughs in 1900. Rùm was purchased by the Nature Conservancy Council in 1957.

Rùm is mainly igneous in origin, and its mountains have been eroded by Pleistocene glaciation. It is now an important study site for research in ecology, especially of red deer, and is the site of a successful reintroduction programme for the white-tailed sea eagle. Its economy is entirely dependent on Scottish Natural Heritage, a public body that now manages the island, and there have been calls for a greater diversity of housing provision. A Caledonian MacBrayne ferry links the island with the mainland town of Mallaig.

Autumnwatch episode 3 2019: It is Halloween so time to reveal the wild secrets of Troll Mountain on the Island of Rum in another hour-long live programme.