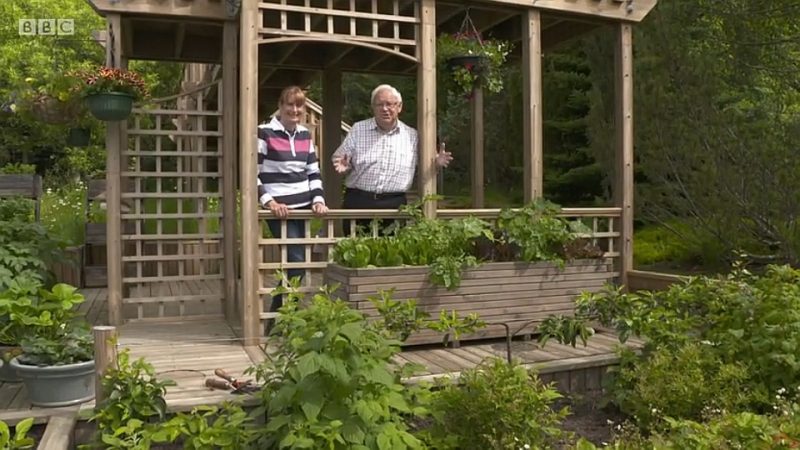 In Beechgrove Garden episode 14 2017, Jim is investigating the mysterious death of a hedge. He suspects foul play, and has a water diviner on hand to search for clues.

Carole is in Ardersier for the second visit to see how Mari Reid and her friends are getting on in Vegetable Gardening on a Budget. Recent research suggests that we could all save £1,500 a year by growing our own. Mari and her friends are putting that theory to the test.

Jim takes the high road to Ballinluig, where Ian and Christine Jones have created a hidden gem of a garden at 600ft above sea level.

We do keep going on about the weather at Beechgrove but it’s important as sunshine and rain spurs on the growth in plants. It was summer pruning time for the cordon apple trees as they are full of green, fresh vegetative growth, and if we don’t prune now then there be a smaller crop.

The first job of the day for Jim was to prune all lateral or side shoots so that they are only 3-4 inches long. This means that the stub – or spur left will produce fruit buds for next year. This will also allow light to get to the fruit for ripening. Whatever you do, do not prune the lead shoot.

2. Vegetable Garden on a Budget

Carole returned to Ardersier near Inverness in the second part of her series. She checked on progress with Mari Reid and her vegetable growing project with friends and neighbours Mary and Rosemarie, since her last visit in April. Mari’s garden is too small to grow produce and so she has come up with a couple of clever ideas to share land and gardens to feed her own plus two other families.

At Mary’s veg patch near Loch Flemington, Carole was amazed at the progress in 8 weeks. Mary and her children have eaten so much salad, and peas, and baby carrots already.

From time to time we draw attention to the conifer hedging trial at Beechgrove. Jim’s particular favourite is Tsuga heterophylla or
Western Hemlock as it looks stunning. Then there is yew, a more common hedging plant. Jim then moved onto Chamaecyparis lawsoniana
‘Stardust’ where the 1st 3 plants were looking superb. However the rest of the row was dead! This is the second time that this has happened and knowing about the waterworks of this site Jim suspected it was a water issue so he called in a diviner/dowser to help
determine if it was a ‘lake; underneath the plants. 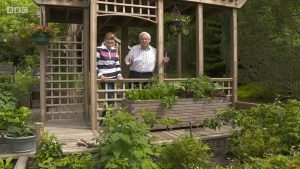 In Beechgrove Garden episode 14 2017, Jim is investigating the mysterious death of a hedge. He suspects foul play, and has a water diviner on hand