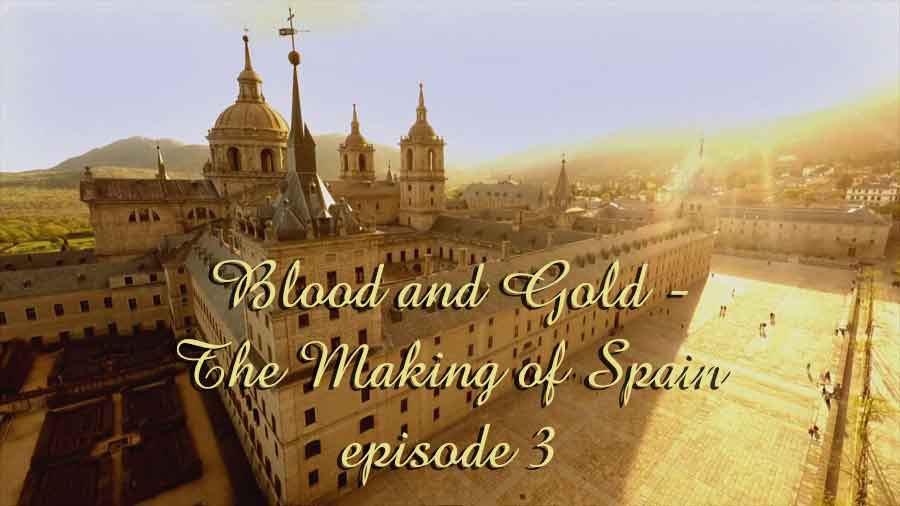 Blood and Gold - The Making of Spain episode 3

Blood and Gold – The Making of Spain episode 3: Simon explores Spain’s golden age under Philip II through to the Spanish Civil War and dictatorship under Franco, from which Spain has emerged as a modern democratic monarchy.

Blood and Gold – The Making of Spain episode 3

The son of Holy Roman Emperor and King of the Spanish kingdoms Charles V and Isabella of Portugal, Philip was called Felipe el Prudente (‘Philip the Prudent’) in the Spanish kingdoms; his empire included territories on every continent then known to Europeans, including his namesake the Philippines. During his reign, the Spanish kingdoms reached the height of their influence and power. This is sometimes called the Spanish Golden Age.

The Spanish Golden Age is a period of flourishing in arts and literature in Spain, coinciding with the political rise of the Spanish Empire under the Catholic Monarchs of Spain and the Spanish Habsburgs. The greatest patron of Spanish art and culture during this period was King Philip II (1556-1598), whose royal palace, El Escorial, invited the attention of some of Europe’s greatest architects and painters such as El Greco, who infused Spanish art with foreign styles and helped create a uniquely Spanish style of painting.

Spanish literature blossomed as well, most famously demonstrated in the work of Miguel de Cervantes, the author of Don Quixote de la Mancha. Spain’s most prolific playwright, Lope de Vega, wrote possibly one thousand plays during his lifetime, of which over four hundred survive to the present day. Diego Velázquez, regarded as one of the most influential painters of European history and a greatly respected artist in his own time, was patronized by King Philip IV and his chief minister, the Count-Duke of Olivares.

The legacy of Diego Velázquez includes several portraits that demonstrate his style and skill. Some of Spain’s greatest music is regarded as having been written in the period. Such composers as Tomás Luis de Victoria, Cristóbal de Morales, Francisco Guerrero, Luis de Milán and Alonso Lobo helped to shape Renaissance music and the styles of counterpoint and polychoral music, and their influence lasted far into the Baroque period which resulted in a revolution of music.

Francisco Franco Bahamonde was a Spanish general who led the Nationalist forces in overthrowing the Second Spanish Republic during the Spanish Civil War and thereafter ruled over Spain from 1939 to 1975 as a dictator, assuming the title Caudillo. This period in Spanish history, from the Nationalist victory to Franco’s death, is commonly known as Francoist Spain or the Francoist dictatorship.

Born in Ferrol, Spain into an upper-class military family, Franco served in the Spanish Army as a cadet in the Toledo Infantry Academy from 1907 to 1910. While serving in Morocco, he rose through the ranks to become brigadier general in 1926, aged 33, becoming the youngest general in Spain. Two years later Franco became the director of the General Military Academy in Zaragoza. As a conservative and monarchist, Franco regretted the abolition of the monarchy and the establishment of the Second Republic in 1931.

He was devastated by the closing of his Academy, but nevertheless continued his service in the Republican Army. His career redoubled after the right-wing CEDA and PRR won the 1933 election empowering him to lead the suppression of the 1934 uprising in Asturias. Franco was briefly elevated to Chief of Army Staff before the 1936 election moved the leftist Popular Front into power, relegating him to the Canary Islands. After initial reluctance, he joined the July 1936 military coup which, after failing to take Spain, sparked the Spanish Civil War.

Title
Blood and Gold - The Making of Spain episode 3
Description

The Making of Spain episode 3: Explores Spain's golden age under Philip II through to the Spanish Civil War and dictatorship under Franco

How to Build a Cathedral