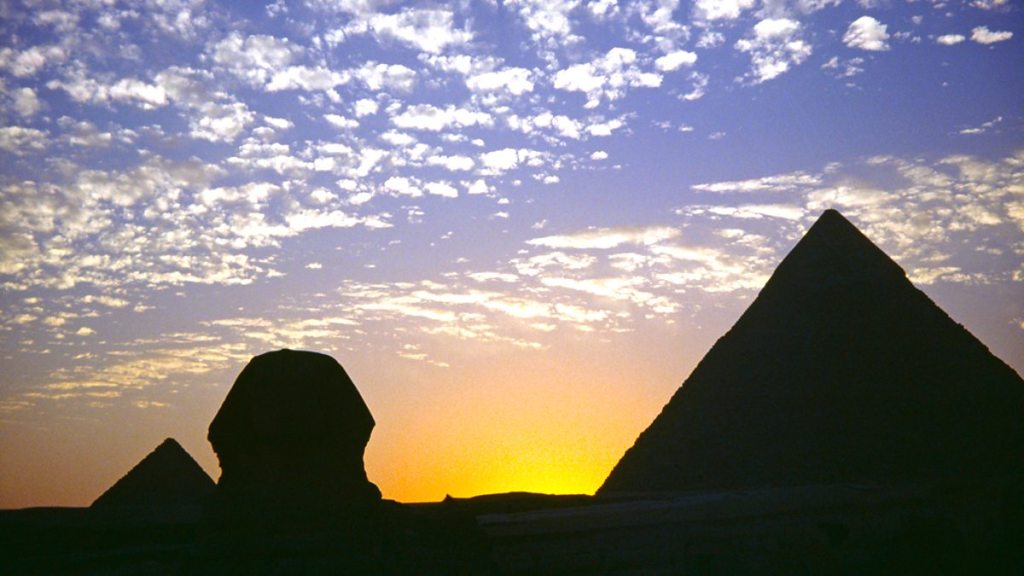 Professor Fekri Hassan attempts to determine why the Egyptian Old Kingdom, the civilisation of the great pyramids, collapsed around 2200 BC. Can science show that terrible forces of nature were to blame – even driving people to cannibalism?

Clues come from the remote deserts of southern Egypt, the glaciers of Iceland and a dramatic and unique archaeological find in the Nile delta.

Scientists gather for a new series attempting to explain the dis-appearance of ancient civilisations. This first investigates the abrupt end of the Old Kingdom of Egypt, 4,200 years ago. Conventional wisdom cites a political struggle. Professor Fekri Hassan demurs. He has found hieroglyphics stating that ‘The entire country has become like a starved grasshopper… everyone has taken to eating their children’. Another expert calls this ‘typical Egyptian rhetoric’.

However, in 1996, the remains of 9,000 bodies were discovered in the Nile Delta, with evidence suggesting a famine.

The Old Kingdom is the period in the third millennium (c. 2686–2181 BC) also known as the ‘Age of the Pyramids’ or ‘Age of the Pyramid Builders’ as it includes the great 4th Dynasty when King Sneferu perfected the art of pyramid building and the pyramids of Giza were constructed under the kings Khufu, Khafre, and Menkaure. Egypt attained its first continuous peak of civilization – the first of three so-called “Kingdom” periods (followed by the Middle Kingdom and New Kingdom) which mark the high points of civilization in the lower Nile Valley.

The term itself was coined by eighteenth-century historians and the distinction between the Old Kingdom and the Early Dynastic Period is not one which would have been recognized by Ancient Egyptians. Not only was the last king of the Early Dynastic Period related to the first two kings of the Old Kingdom, but the ‘capital’, the royal residence, remained at Ineb-Hedg, the Ancient Egyptian name for Memphis. The basic justification for a separation between the two periods is the revolutionary change in architecture accompanied by the effects on Egyptian society and economy of large-scale building projects.

Professor Fekri Hassan attempts to determine why the Egyptian Old Kingdom, the civilisation of the great pyramids, collapsed around 2200 BC.