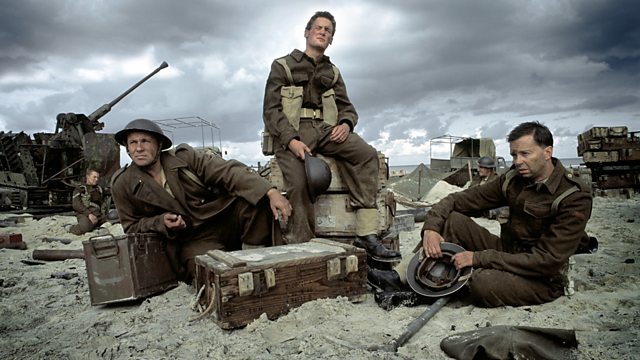 Docudrama about events at Dunkirk in 1940. The Allies are in retreat, but the Navy can only pick up a few soldiers and Churchill is advised to make peace to save the rest. Dunkirk used archive film footage, eyewitness accounts and original dramatised sequences to describe the events of the 1940 Dunkirk evacuation.

The Allies in northern France are in retreat, but the Navy only expects to be able to pick up a few soldiers and Churchill is under pressure to make peace in order to save the rest. Alf Tombs’s unit helps hold open a corridor to aid the retreat, successfully allowing thousands to escape over 48 hours; on the beaches Captain Tennant makes use of a flimsy pier to speed the evacuation. As the weather changes the pier and the beaches are bombed heavily.

The army has now made its way back to the overcrowded coast. More boats are needed and the admiralty begins to requisition a fleet of small craft including cockle fishing boats from Leigh-On-Sea. In spite of the dangers the fishermen from Leigh begin to lift men off the beaches. As the strain on the little boat begins to tell the engine fails. In England the public begin to realise the cost of the successful evacuation and are left to face the threat of invasion.

Dunkirk has become a siege town. While a large number of the army have been evacuated many tens of thousands still remain. Jimmy Langley is injured during fierce fighting trying to hold back the final German advance and taken to a casualty clearing station where Major Newman has been trying to evacuate his wounded patients. However no arrangements have been made for them and they are left behind to face the Germans who arrive on the same day as Churchill makes his famous speech vowing ‘we will never surrender’.

Docudrama about events at Dunkirk in 1940. The Allies are in retreat, but the Navy can only pick up a few soldiers