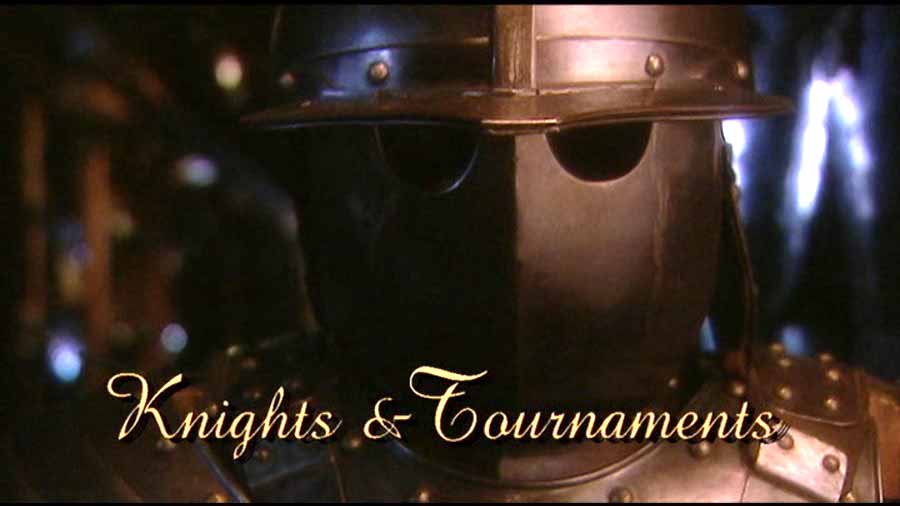 Europe in the Middle Ages episode 1 - Knights and Tournaments

Europe in the Middle Ages episode 1 – Knights and Tournaments : Picturesque castles, noble knights, minnesingers and troubadours – these romantic images fire our imagination in the generally accepted conception of the Middle Ages.

On the darker side of this world, there are gloomy castle dungeons, torture chambers and bloody raids and power struggles. The courtly culture of the armoured knights formed a caste with its own code of honour in which the art of war and chivalry played an important role and that was ruled by the king. The castles represented a cosmos of their own: fortress, residence, army camp, customs post and hideout.

The Middle Ages were dark in the literal sense of the word: apart from precious wax, which hardly anyone could afford, there was in fact no other form of artificial light. Scholars begged God for light to enable them to pursue their studies. In fact, the ‘Dark Ages’ between 800 and 1500 were a brilliant, dynamic time that paved the way for many achievements of our modern day world.

A knight is a person granted an honorary title of knighthood by a head of state (including the pope) or representative for service to the monarch, the church or the country, especially in a military capacity. The background of knighthood can be traced back to the Greek hippeis (ἱππεῖς) and Roman eques of classical antiquity.

In the Early Middle Ages in Europe, knighthood was conferred upon mounted warriors. During the High Middle Ages, knighthood was considered a class of lower nobility. By the Late Middle Ages, the rank had become associated with the ideals of chivalry, a code of conduct for the perfect courtly Christian warrior. Often, a knight was a vassal who served as an elite fighter, a bodyguard or a mercenary for a lord, with payment in the form of land holdings. The lords trusted the knights, who were skilled in battle on horseback.

Knighthood in the Middle Ages was closely linked with horsemanship (and especially the joust) from its origins in the 12th century until its final flowering as a fashion among the high nobility in the Duchy of Burgundy in the 15th century. This linkage is reflected in the etymology of chivalry, cavalier and related terms. In that sense, the special prestige accorded to mounted warriors in Christendom finds a parallel in the furusiyya in the Islamic world.

In peacetime, knights often demonstrated their martial skills in tournaments, which usually took place on the grounds of a castle. Knights can parade their armour and banner to the whole court as the tournament commenced. Medieval tournaments were made up of martial sports called hastiludes, and were not only a major spectator sport but also played as a real combat simulation. It usually ended with many knights either injured or even killed.

One contest was a free-for-all battle called a melee, where large groups of knights numbering hundreds assembled and fought one another, and the last knight standing was the winner. The most popular and romanticized contest for knights was the joust. In this competition, two knights charge each other with blunt wooden lances in an effort to break their lance on the opponent’s head or body or unhorse them completely. The loser in these tournaments had to turn his armour and horse over to the victor. The last day was filled with feasting, dancing and minstrel singing.

The series clears up misconceptions, solves puzzles and also investigates both mundane and technical questions: What did the first mechanical clock, or the first globe, look like, for example? With what force did a lance in full flight strike a suit of armour? And why did the invention of the horse halter and the giro account represent a veritable cultural revolution? Europe In The Middle Ages is a series that attempts to meld historical inquiry with period re-enactments to transport the viewer back to this turbulent and exciting time.

Knights and Tournaments : Castles, noble knights - these romantic images fire our imagination in the generally accepted conception of the Middle Ages.