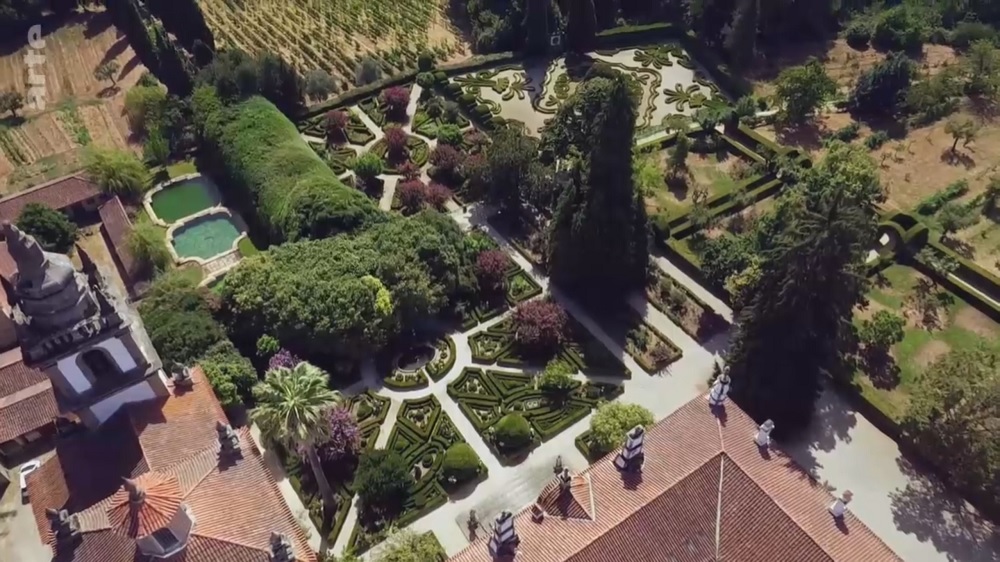 Gardens Near and Far episode 7 – The Casa de Mateus baroque palace and grounds, nestle among vineyards near the Douro valley, in northern Portugal.

The Casa de Mateus estate has belonged to the counts of Albuquerque for over three centuries. Its wealth stems from cereals and wine production. Its crowning splendour is the impeccably maintained, constantly changing formal gardens, but the buildings, gardens, vineyards and orchards form a perfect whole, making this one of the finest and most historic gardens in Portugal and indeed in Europe.

Built in the first half of the 18C and betraying the finishing touches of Nicolau Nasoni, this palace set in beautiful gardens on a vast farm is considered to be one of the finest examples of baroque civil architecture in Portugal. Its interior decoration includes some intricately carved wood ceilings, furniture from several periods, 17th and 18th century paintings, silverware, ceramics and a library with a remarkable edition of the epic poem Os Lusíadas.

The palace is owned by the Mateus Foundation, which has sponsored a great number of cultural activities, particularly in the areas of music, literature, sculpture and ceramics, organising festivals, courses, seminars and exhibitions.

The earliest parts of the gardens are traditionally attributed to Diogo Álvares Botelho Mourão, Archdeacon of Covilhã and brother of the 3rd Morgado, who built the House. These are situated to the east and consist of a staircase in the central axis of the building and the adjacent trellises. The plans in an inventory made at the end of the 18th century refer to an exit into the gardens to the east, and to the south an area under planting and the Quinta.

The 3rd Count of Vila Real, at the time of improvements to the House, diverted the public road which crossed the Quinta from north to south in front of the principal façade, and in 1870 planted the cedars that today shade the building and the lake. He was also responsible for planting the camellias and palm trees in the gardens that he laid out to the east of the House and which still today form the only intimate and romantic touch in the geometrical layout of the upper level.

Gardens Near and Far episode 7 – The Casa de Mateus baroque palace and grounds, nestle among vineyards near the Douro valley, in northern Portugal.