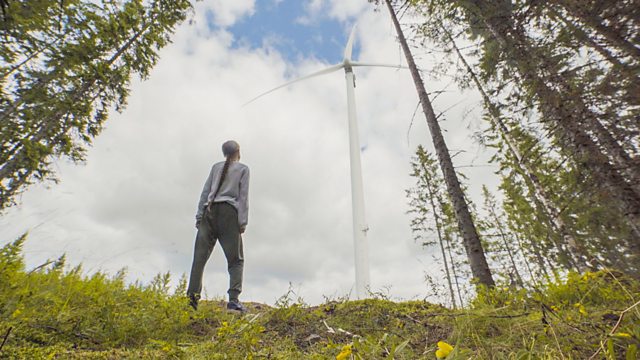 Greta Thunberg: A Year to Change the World episode 3: As the world is bought to a standstill by the Covid-19 pandemic, Greta has to put her plans on hold.

The pandemic reveals the enormity of the challenge that tackling climate change poses as Greta learns the drop in emissions caused by the 2020 lockdowns is not enough to put the world on track to meet its climate goals. With mass protests off the agenda, Greta investigates what else could help limit the impact of climate change.

She visits a tree plantation to learn how the age of a forest has an impact on whether or not it can take carbon dioxide from the atmosphere. In Switzerland, she encounters a machine that sucks carbon dioxide out of the air, and in Denmark, where it has been estimated around half of the land is used to grow food for livestock, she visits a research farm that is exploring ways to reduce greenhouse gas emissions generated by beef and dairy cows. Greta also looks closer to home and contemplates how everyone can play a part – from our choice of the food we eat to the clothes we wear.

Having recovered from Covid-19, Greta also explores what lessons can be learned from the international response to the pandemic, meeting with German chancellor Angela Merkel to demand more rapid action to challenge climate change before she returns to school at the end of a pivotal year.

Greta Tintin Eleonora Ernman Thunberg is a Swedish environmental activist who is internationally known for challenging world leaders to take immediate action against climate change. Thunberg initially gained notice for her youth and her straightforward speaking manner, both in public and to political leaders and assemblies, in which she criticises world leaders for their failure to take what she considers sufficient action to address the climate crisis.

Thunberg’s activism started after persuading her parents to adopt several lifestyle choices to reduce their own carbon footprint. In August 2018, at age 15, she started spending her school days outside the Swedish Parliament to call for stronger action on climate change by holding up a sign reading Skolstrejk för klimatet (School strike for climate). Soon other students engaged in similar protests in their own communities. Together they organised a school climate strike movement under the name Fridays for Future.

After Thunberg addressed the 2018 United Nations Climate Change Conference, student strikes took place every week somewhere in the world. In 2019, there were multiple coordinated multi-city protests involving over a million students each. To avoid flying, Thunberg sailed to North America where she attended the 2019 UN Climate Action Summit. Her speech there, in which she exclaimed “how dare you”, was widely taken up by the press and incorporated into music.

Her sudden rise to world fame has made her both a leader and a target for critics, especially due to her age. Her influence on the world stage has been described by The Guardian and other newspapers as the “Greta effect”. She received numerous honours and awards, including an honorary Fellowship of the Royal Scottish Geographical Society, inclusion in Time’s 100 most influential people, being the youngest Time Person of the Year, inclusion in the Forbes list of The World’s 100 Most Powerful Women (2019), and three consecutive nominations for the Nobel Peace Prize.

Climate change includes both global warming driven by human emissions of greenhouse gases and the resulting large-scale shifts in weather patterns. Though there have been previous periods of climatic change, since the mid-20th century humans have had an unprecedented impact on Earth’s climate system and caused change on a global scale.

The largest driver of warming is the emission of greenhouse gases, of which more than 90% are carbon dioxide (CO2) and methane. Fossil fuel burning (coal, oil, and natural gas) for energy consumption is the main source of these emissions, with additional contributions from agriculture, deforestation, and manufacturing. The human cause of climate change is not disputed by any scientific body of national or international standing. Temperature rise is accelerated or tempered by climate feedbacks, such as loss of sunlight-reflecting snow and ice cover, increased water vapour (a greenhouse gas itself), and changes to land and ocean carbon sinks.

Temperature rise on land is about twice the global average increase, leading to desert expansion and more common heat waves and wildfires. Temperature rise is also amplified in the Arctic, where it has contributed to melting permafrost, glacial retreat and sea ice loss. Warmer temperatures are increasing rates of evaporation, causing more intense storms and weather extremes. Impacts on ecosystems include the relocation or extinction of many species as their environment changes, most immediately in coral reefs, mountains, and the Arctic.

Greta Thunberg: A Year to Change the World episode 3: As the world is bought to a standstill by the Covid, Greta has to put her plans on hold