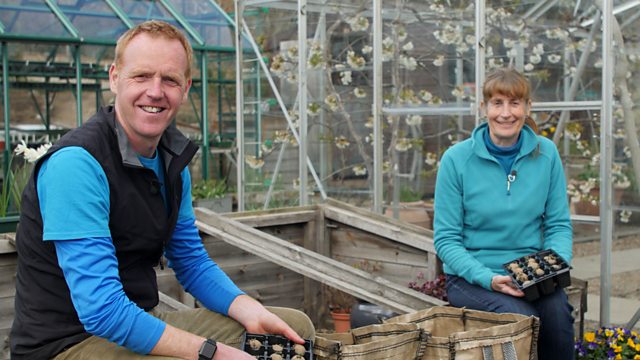 The Beechgrove Garden 2021 episode 4: In this episode, Carole shows how to grow potatoes in recycled containers, while Brian is growing heritage potatoes in the veg plot. Meanwhile, Calum Clunie shares some secrets of award-winning potato growing at his Leven allotment.

George is at home in sunny Joppa and shows the progress of his speedy seeds for small spaces, and we catch up with Lucy Dalglish, whose modest Maryhill balcony is overflowing with edible promise this year.

How to grow potatoes

Potatoes are hugely versatile and a staple ingredient of many meals in one form or another – boiled, mashed, chipped or baked. Potatoes are classified as being either earlies or maincrops. Early varieties are ready to harvest much sooner than maincrops and are what we call ‘new potatoes’. Maincrop varieties are in the ground a lot longer. They produce a larger harvest and bigger potatoes.

Potatoes are grown from specially prepared ‘seed’ potatoes (or tubers). These are just like potatoes you buy from the supermarket, but they’re certified virus-free. You can buy seed potatoes from late winter onwards. You then start them off indoors by letting them sprout, before they are planted.

It’s important with earlies, and a good idea with maincrops, to ‘chit’ the seed potatoes before planting. This means allowing them to start sprouting shoots.

Stand them rose end up (the end with the most small dents, or eyes) in egg boxes or trays in a light, frost-free place. The potatoes are ready to plant when the shoots are about 3cm (1in) long. With early potatoes, rub off the weakest shoots, leaving four per tuber.

Potato plants need ‘earthing up’ as they grow, to protect early shoots from frost damage and ensure the developing potatoes aren’t exposed to light, which turns them green and poisonous.

It’s a simple process – once the stems are about 23cm (9in) tall, draw soil up around them, creating a ridge about 15cm (6in) high. As the stems grow, repeat the process several times. The final height of the ridge should be 20–30cm (8in–1ft). Keep the plants well watered in dry weather – particularly once the tubers start to form. Maincrop potatoes benefit from a nitrogen-rich fertiliser around the time of the second earthing up.

The Beechgrove Garden 2021 episode 4: Carole shows how to grow potatoes in recycled containers, while Brian is growing heritage potatoes.