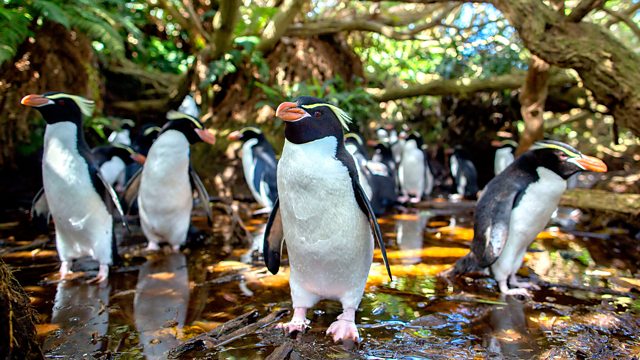 New Zealand – Earth’s Mythical Islands episode 1: transports you to an exotic, magnificent and isolated island chain where the mysterious and unexpected story of its true nature is revealed. Narrated by Sam Neill.

Isolated since the time of the dinosaurs, New Zealand’s wildlife has been left to its own devices, with surprising consequences. Its ancient forests are still stalked by predators from the Jurassic era. It’s also one of the most geologically active countries on earth.

From Kiwis with their giant eggs, to forest-dwelling penguins and helicopter-riding sheep dogs, meet the astonishing creatures and resilient people who must rise to the challenges of their beautiful, dramatic and demanding home.

New Zealand is an island country in the southwestern Pacific Ocean. It comprises two main landmasses—the North Island (Te Ika-a-Māui) and the South Island (Te Waipounamu)—and around 600 smaller islands, covering a total area of 268,021 square kilometres (103,500 sq mi). New Zealand is about 2,000 kilometres (1,200 mi) east of Australia across the Tasman Sea and 1,000 kilometres (600 mi) south of the islands of New Caledonia, Fiji, and Tonga. The country’s varied topography and sharp mountain peaks, including the Southern Alps, owe much to tectonic uplift and volcanic eruptions.

New Zealand’s geographic isolation for 80 million years and island biogeography has influenced evolution of the country’s species of animals, fungi and plants. Physical isolation has caused biological isolation, resulting in a dynamic evolutionary ecology with examples of very distinctive plants and animals as well as populations of widespread species. About 82% of New Zealand’s indigenous vascular plants are endemic, covering 1,944 species across 65 genera.

The number of fungi recorded from New Zealand, including lichen-forming species, is not known, nor is the proportion of those fungi which are endemic, but one estimate suggests there are about 2,300 species of lichen-forming fungi in New Zealand and 40% of these are endemic. The two main types of forest are those dominated by broadleaf trees with emergent podocarps, or by southern beech in cooler climates. The remaining vegetation types consist of grasslands, the majority of which are tussock.

Before the arrival of humans, an estimated 80% of the land was covered in forest, with only high alpine, wet, infertile and volcanic areas without trees. Massive deforestation occurred after humans arrived, with around half the forest cover lost to fire after Polynesian settlement. Much of the remaining forest fell after European settlement, being logged or cleared to make room for pastoral farming, leaving forest occupying only 23% of the land.

A Park for All Seasons from Above episode 5 – Fall Colours