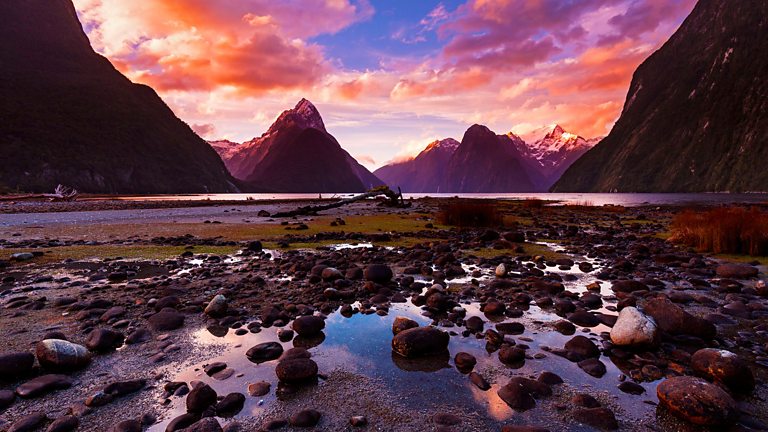 New Zealand – Earth’s Mythical Islands episode 2: The most extreme and wild parts of New Zealand are in the South Island, which lie towards Antarctica, in the path of the tempestuous ‘roaring forties’. This is home to some of the most rapidly rising mountains in the world, the Southern Alps.

From hyper-intelligent parrots to sinister snails with teeth and magical constellations of glow-worms, this is the story of New Zealand’s wildest places and its most resilient pioneers, all of whom must embrace radical solutions to survive.

New Zealand – Earth’s Mythical Islands episode 2: transports you to an exotic, magnificent and isolated island chain where the mysterious and unexpected story of its true nature is revealed. Narrated by Sam Neill.

The Southern Alps is a mountain range extending along much of the length of New Zealand’s South Island, reaching its greatest elevations near the range’s western side. The name “Southern Alps” generally refers to the entire range, although separate names are given to many of the smaller ranges that form part of it.

The range includes the South Island’s Main Divide, which separates the water catchments of the more heavily populated eastern side of the island from those on the west coast. Politically, the Main Divide forms the boundary between the Marlborough, Canterbury and Otago regions to the southeast and the Tasman and West Coast regions to the northwest.

The Southern Alps run approximately 500 km northeast to southwest. Its tallest peak is Aoraki / Mount Cook, the highest point in New Zealand at 3,724 metres. The Southern Alps include sixteen other points that exceed 3,000 metres in height. The mountain ranges are bisected by glacial valleys, many of which are infilled with glacial lakes on the eastern side including Lake Coleridge in the north to Lake Wakatipu in Otago in the south. According to an inventory conducted in the late 1970s, the Southern Alps contained over 3,000 glaciers larger than one hectare, the longest of which – the Tasman Glacier – is 23.5 kilometres (14.6 mi) in length which has retreated from a recent maximum of 29 kilometres (18 mi) in the 1960s.

Earth's Mythical Islands episode 2: The most extreme and wild parts of New Zealand are in the South Island, which lie towards Antarctica