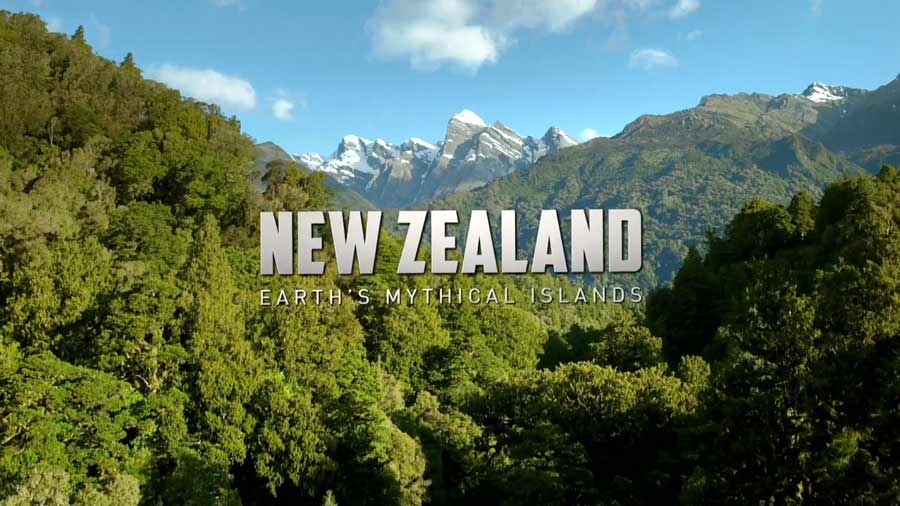 New Zealand – Earth’s Mythical Islands episode 3: New Zealand was one of the last land masses to be found and settled by people. Lush and fertile, almost everything brought here flourishes, often with surprising consequences.

Told through the experiences of its native species – in particular, a charismatic and peculiar giant, flightless parrot – this is the moving story of the changing fortunes of New Zealand’s wildlife since humans first arrived.

New Zealand – Earth’s Mythical Islands episode 2: transports you to an exotic, magnificent and isolated island chain where the mysterious and unexpected story of its true nature is revealed. Narrated by Sam Neill.

Prior to human settlement, the mammals of New Zealand consisted entirely of several species of bat, and several dozen marine mammal species (though the Miocene Saint Bathans Mammal shows that at some point there were terrestrial, “archaic” mammal species). The Māori brought the kurī (Polynesian dog) and kiore (Polynesian rat) in about 1250 CE, and Europeans from 1769 onwards brought the pig, mice, two additional species of rats, weasels, stoats, ferrets and possums and many other species, some of which cause conservation problems for indigenous species.

The animals of New Zealand, part of its biota, have a particularly interesting history because, before the arrival of humans, less than 900 years ago, the country was mostly free of mammals, except those that could swim there (seals, sea lions, and, off-shore, whales) or fly there (bats), though as recently as the Miocene there was the terrestrial Saint Bathans Mammal, implying that mammals were present since the island broke away from other landmasses.

This meant that all the ecological niches occupied by mammals elsewhere were occupied by either insects or birds, leading to an unusually large number of flightless birds, including the kiwi, the weka, the moa (now extinct), the takahē, and the kakapo.

Because of the lack of predators even the bats spend most of their time on the ground. There are also about 60 species of lizard (30 each of gecko and skink), four species of frog (all rare and endangered) and the tuatara (reptiles resembling lizards but with a distinct lineage).

New Zealand - Earth's Mythical Islands episode 3: New Zealand was one of the last land masses to be found and settled by people.

The Magic of Mushrooms