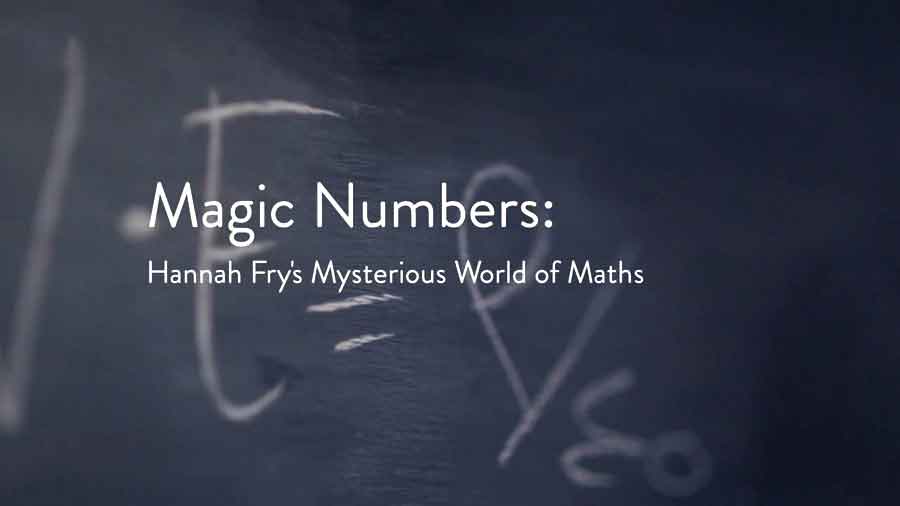 Magic Numbers: Hannah Fry’s Mysterious World of Maths episode 3: Hannah explores a paradox at the heart of modern maths, discovered by Bertrand Russell, which undermines the very foundations of logic that all of maths is built on. These flaws suggest that maths isn’t a true part of the universe but might just be a human language – fallible and imprecise.

However, Hannah argues that Einstein’s theoretical equations, such as E=mc2 and his theory of general relativity, are so good at predicting the universe that they must be reflecting some basic structure in it. This idea is supported by Kurt Godel, who proved that there are parts of maths that we have to take on faith.

Hannah then explores what maths can reveal about the fundamental building blocks of the universe – the subatomic, quantum world. The maths tells us that particles can exist in two states at once, and yet quantum physics is at the core of photosynthesis and therefore fundamental to most of life on earth – more evidence of discovering mathematical rules in nature. But if we accept that maths is part of the structure of the universe, there are two main problems: firstly, the two main theories that predict and describe the universe – quantum physics and general relativity – are actually incompatible; and secondly, most of the maths behind them suggests the likelihood of something even stranger – multiple universes.

We may just have to accept that the world really is weirder than we thought, and Hannah concludes that while we have invented the language of maths, the structure behind it all is something we discover. And beyond that, it is the debate about the origins of maths that has had the most profound consequences: it has truly transformed the human experience, giving us powerful new number systems and an understanding that now underpins the modern world.

In this new series, mathematician Dr Hannah Fry explores the mystery of maths. It underpins so much of our modern world that its hard to imagine life without its technological advances, but where exactly does maths come from? Is it invented like a language or is it something discovered, part of the fabric of the universe? As we increasingly come to rely on maths, this question becomes more important to answer.

Bertrand Arthur William Russell was a British polymath, philosopher, logician, mathematician, historian, writer, social critic, political activist, and Nobel laureate. Throughout his life, Russell considered himself a liberal, a socialist and a pacifist, although he also sometimes suggested that his sceptical nature had led him to feel that he had “never been any of these things, in any profound sense”. Russell was born in Monmouthshire into one of the most prominent aristocratic families in the United Kingdom.

In the early 20th century, Russell led the British “revolt against idealism”. He is considered one of the founders of analytic philosophy along with his predecessor Gottlob Frege, colleague G. E. Moore and protégé Ludwig Wittgenstein. He is widely held to be one of the 20th century’s premier logicians. With A. N. Whitehead he wrote Principia Mathematica, an attempt to create a logical basis for mathematics, the quintessential work of classical logic. His philosophical essay “On Denoting” has been considered a “paradigm of philosophy”. His work has had a considerable influence on mathematics, logic, set theory, linguistics, artificial intelligence, cognitive science, computer science (see type theory and type system) and philosophy, especially the philosophy of language, epistemology and metaphysics.

Mysterious World of Maths: explores a paradox at the heart of modern maths, which undermines the very foundations of logic.

Botany – A Blooming History episode 1 – A Confusion of Names