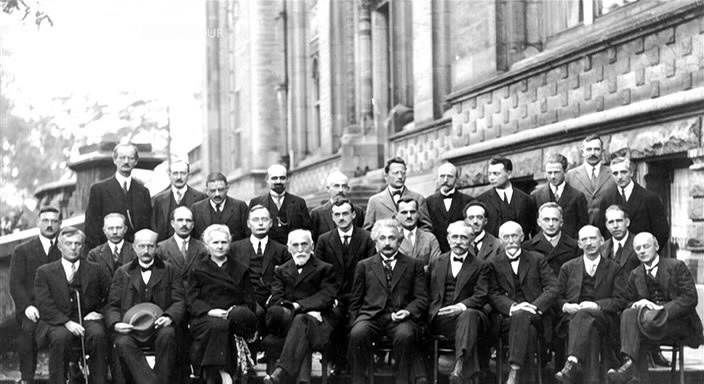 The Atom : The story of the discovery that everything is made from atoms, one of the greatest scientific breakthroughs in history, and the brilliant minds behind it. The series tells a story of geniuses like Albert Einstein and Werner Heisenberg who were driven by their thirst for knowledge and glory. It is a story of false starts and conflicts, ambition and revelation, a story which leads us through some of the most exciting and exhilarating ideas ever conceived by the human race.

The Atom – The Clash of the Titans part 1

The first of three programmes in which nuclear physicist Professor Jim Al-Khalili tells the story of the greatest scientific discovery ever – that everything is made of atoms. As scientists delved deep into the atom, into the very heart of matter, they unravelled nature’s most shocking secrets. They had to abandon everything they believed in and create a whole new science, which today underpins the whole of physics, chemistry, biology and maybe even life itself.

The Atom – The Key to the Cosmos part 2

The second in Professor Jim Al-Khalili’s three-part documentary about the basic building block of our universe, the atom. He shows how, in our quest to understand the tiny atom, we unravelled the mystery of how the universe was created. It’s a story with dramatic twists and turns, taking in world-changing discoveries like radioactivity, the atom bomb and the big bang. All this forms part of an epic narrative in which the greatest brains of the 20th century competed to answer the biggest questions of all – why are we here and how were we made?

The Illusion of Reality part 3

The final part of Professor Jim Al-Khalili’s documentary series about the basic building block of our universe, the atom. Al-Khalili explores how studying the atom forced us to rethink the nature of reality itself, encountering ideas that seem like they are from science fiction but in fact are a central part of modern science. He discovers that there might be parallel universes in which different versions of us exist and finds out that empty space is not empty at all, but seething with activity.

The world we think we know – the solid, reassuring world of our senses – turns out to be a tiny sliver of an infinitely weirder and more wonderful universe than we had ever conceived in our wildest fantasies.

The Atom : The story of the discovery that everything is made from atoms, one of the greatest scientific breakthroughs in history, and the brilliant minds behind it