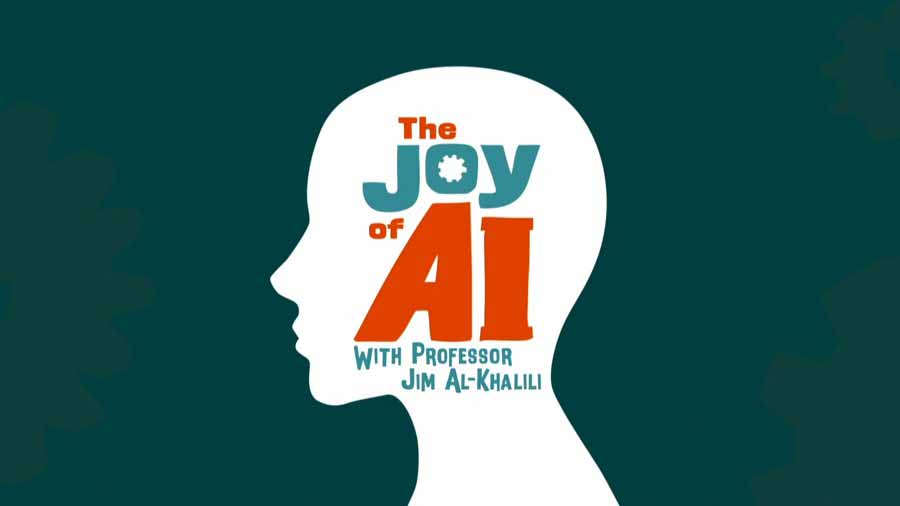 The Joy of AI: Professor Jim Al-Khalili looks at how we have created machines that can simulate, augment, and even outperform the human mind – and why we shouldn’t let this spook us.

He reveals the story of the pursuit of AI, the emergence of machine learning and the recent breakthroughs brought about by artificial neural networks. He shows how AI is not only changing our world but also challenging our very ideas of intelligence and consciousness.

Along the way, we’ll investigate spam filters, meet a cutting-edge chat-bot, look at why a few altered pixels makes a computer think it’s looking at a trombone rather than a dog and talk to Demis Hassabis, who heads DeepMind and whose stated mission is to ‘solve intelligence, and then use that to solve everything else’. Stephen Hawking remarked ‘AI could be the biggest event in the history of our civilisation. Or the worst’.

Jim argues that AI is a potent new tool that should enhance our lives, not replace us.

In computer science, artificial intelligence (AI), sometimes called machine intelligence, is intelligence demonstrated by machines, in contrast to the natural intelligence displayed by humans and animals. Leading AI textbooks define the field as the study of “intelligent agents”: any device that perceives its environment and takes actions that maximize its chance of successfully achieving its goals. Colloquially, the term “artificial intelligence” is often used to describe machines (or computers) that mimic “cognitive” functions that humans associate with the human mind, such as “learning” and “problem solving”.

As machines become increasingly capable, tasks considered to require “intelligence” are often removed from the definition of AI, a phenomenon known as the AI effect. A quip in Tesler’s Theorem says “AI is whatever hasn’t been done yet.” For instance, optical character recognition is frequently excluded from things considered to be AI, having become a routine technology. Modern machine capabilities generally classified as AI include successfully understanding human speech, competing at the highest level in strategic game systems (such as chess and Go), autonomously operating cars, intelligent routing in content delivery networks, and military simulations.

Artificial intelligence was founded as an academic discipline in 1955, and in the years since has experienced several waves of optimism, followed by disappointment and the loss of funding (known as an “AI winter”), followed by new approaches, success and renewed funding. For most of its history, AI research has been divided into sub-fields that often fail to communicate with each other. These sub-fields are based on technical considerations, such as particular goals (e.g. “robotics” or “machine learning”), the use of particular tools (“logic” or artificial neural networks), or deep philosophical differences. Subfields have also been based on social factors (particular institutions or the work of particular researchers).

The Joy of AI: Professor Jim Al-Khalili looks at how we have created machines that can simulate, augment, and even outperform the human mind.

What on Earth is Wrong With Gravity?

How the Universe Works episode 1 2019: Nightmares of Neutron Stars