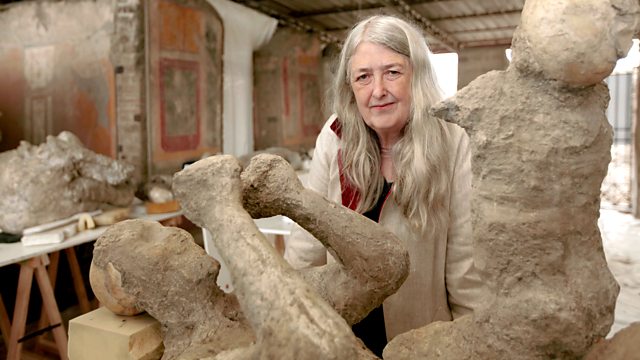 Pompeii – New Secrets Revealed with Mary Beard: With unparalleled access to Pompeii and featuring cutting-edge modern technology, Mary Beard guides us through this amazing slice of the ancient world.

For the first time ever, CT scanning and x-ray equipment bring new light to the secrets of the victims of the 79 AD eruption. Mary unpacks the human stories behind the tragic figures – gladiators, slaves, businesswomen and children.

She goes behind the scenes of the Great Pompeii Project, where restoration teams have gradually removed the layers of time and deterioration from the frescoes and mosaics of houses closed to the public for decades. And with the help of point-cloud scanning technology, Pompeii is seen and explained like never before.

Mary has unprecedented access to hidden storerooms and archaeological labs packed to the hilt with items from daily life: plumbing fittings, pottery, paint pots, foodstuff and fishing nets. As she pieces it all together, Mary presents a film that is a celebratory and unique view of life in this extraordinary town.

Pompeii was an ancient city located in the modern comune of Pompei near Naples in the Campania region of Italy. Along with Herculaneum and many villas in the surrounding area, was buried under 4 to 6 m (13 to 20 ft) of volcanic ash and pumice in the eruption of Mount Vesuvius in AD 79.

Largely preserved under the ash, the excavated city offered a unique snapshot of Roman life, frozen at the moment it was buried, and an extraordinarily detailed insight into the everyday life of its inhabitants, although much of the evidence was lost in the early excavations. It was a wealthy town, enjoying many fine public buildings and luxurious private houses with lavish decorations, furnishings and works of art which were the main attractions for the early excavators.

Organic remains, including wooden objects and human bodies, were entombed in the ash and decayed leaving voids which archaeologists found could be used as moulds to make plaster casts of unique and often gruesome figures in their final moments of life. The numerous graffiti carved on the walls and inside rooms provide a wealth of examples of the largely lost Vulgar Latin spoken colloquially at the time, contrasting with the formal language of the classical writers.

Pompeii is a UNESCO World Heritage Site and is one of the most popular tourist attractions in Italy, with approximately 2.5 million visitors annually. After many excavations prior to 1960 that had uncovered most of the city but left it in decay, further major excavations were banned and instead they were limited to targeted, prioritised areas. In 2018, these led to new discoveries in some previously unexplored areas of the city.

Pompeii - New Secrets Revealed with Mary Beard: With unparalleled access to Pompeii, Mary Beard guides us through this amazing slice of the ancient world.