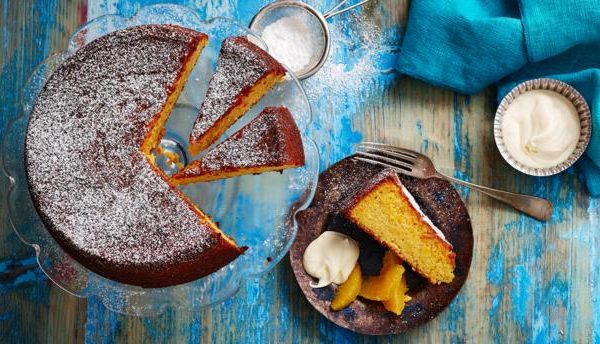 Rick Stein continues travelling down the Californian coastline immortalised by Steinbeck, past citrus groves, vineyards that inspired one his favourite movies, Sideways, and into the city of dreams, Los Angeles.

There, movie icons of old like Charlie Chaplin enjoyed eating lamb’s kidney with bacon alongside the perfect martini on Hollywood Boulevard and where the A-listers of today opt instead for chopped salad off the avenues of Beverly Hills.

On the edge of Downtown LA, Rick discovers Olvera Street, where the Hispanic origins of the city took root. Then onwards, south to San Diego, where he meets 79-year-old Peter Halmay, the oldest sea-urchin diver in town, and where a local fishmonger cooks him the best fish chilli he has ever had.

This cake is a celebration of Californian citrus fruit. After the gold rush, the prosperity of this state, came from the massive cultivation of oranges. Californians treat citrus in the same way as the British view apples. They know all the many varieties and shop for them by taste and name. You can use any kind of small citrus fruit for this cake. 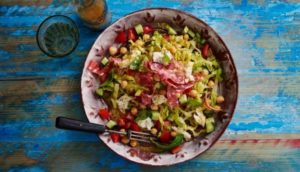 I’m a great fan of the chopped salad. It’s all about the variety of the ingredients that you add and I like the way everything is a uniform size. It’s pleasingly American – like chopped liver, it says what it is.

Chowders served in what the French call ‘en croustade’ are a bit of a speciality in California, though this white chowder would have originated in New England. I have written a few recipes for chowder in my time and as I’m not in the clam capital of the world I have made this with some white fish as well, as otherwise it takes a lot of clams.

Rick Stein continues travelling down the Californian coastline immortalised by Steinbeck, past vineyards that inspired one his favourite movies.