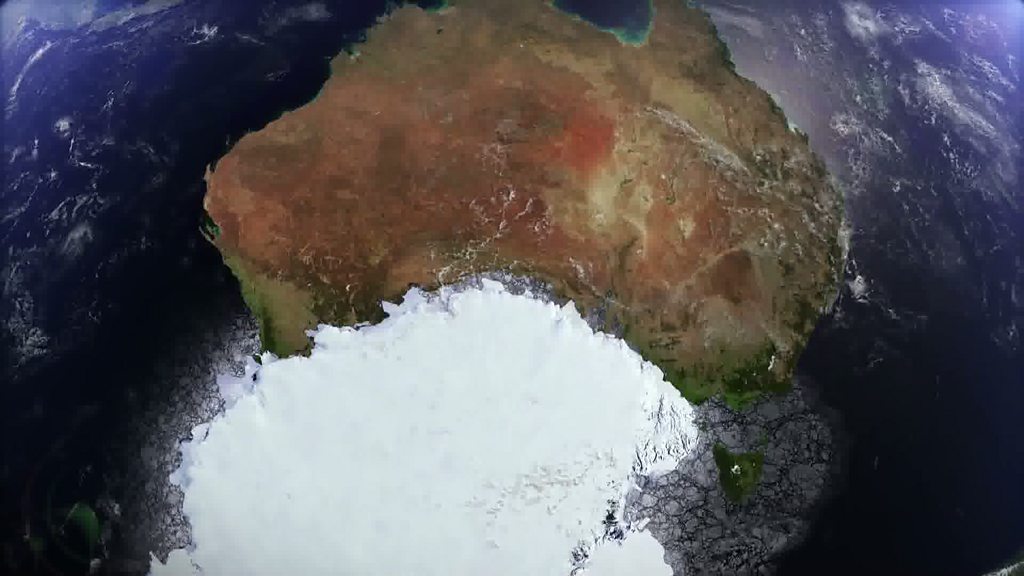 Rise of the Continents episode 2 - Australia

Rise of the Continents episode 2 – Australia: Professor Iain Stewart uncovers the mysterious history of Australia, and shows how Australia’s journey as a continent has affected everything from Aboriginal history to modern-day mining, and even the evolution of Australia’s bizarre wildlife, like the koala.

Iain begins searching for the platypus – a strange creature that is half mammal and half reptile. 200 million years ago reptile-like mammals were found across much of the world because at this time Australia was just one part of a huge landmass called Gondwana, that dominated the southern hemisphere.

Piecing together evidence from fossils found in a sea cliff outside Sydney and rocks recovered from Captain Scott’s expedition to the South Pole, Professor Stewart shows that Gondwana was covered by a forest of now extinct trees called glossopteris. This was the habitat of the ancestors of today’s platypus.

To discover the fate of Gondwana, Iain visits an unusual mining town called Coober Pedy where many of the buildings are underground in dug-out caves. The opals that are mined here enable him to recreate the breakup of Gondwana, and also show how Australia’s formation led to the creation of a vast underground aquifer. This source of hidden water sustained the Aboriginal people as they criss-crossed the otherwise arid Australian interior.

Rise of the Continents episode 2 – Australia

Iain travels to the cliffs of the Australian Bight to show how Australia was once joined to Antarctica, and how their split led to the evolution of the biggest group of mammals on earth – the filter feeding whales.

Australia’s journey away from Antarctica has also left its mark on the koala. Its big, round face and fluffy ears are a result of adaptations to the climate change that Australia has undergone on its northwards journey.

Finally Iain travels to Indonesia to meet the Bajau people of the Banda Sea – sea gypsies who glean almost all they need to live from the waters around them. Contained within these waters is evidence that shows Australia’s eventual fate. Over the next 50 million years, Australia will collide with Asia, its isolation will be over, and it will become forested and lush once again.

The continent of Australia, sometimes known in technical contexts by the names Sahul (/səˈhuːl/), Australinea, or Meganesia to distinguish it from the country of Australia, consists of the landmasses which sit on Australia’s continental plate. The name “Sahul” takes its name from the Sahul Shelf, which is part of the continental shelf of the Australian continent. The continent includes mainland Australia, Tasmania, and the island of New Guinea. Situated in the geographical region of Oceania, Australia is the smallest of the seven traditional continents.

The continent includes a continental shelf overlain by shallow seas which divide it into several landmasses—the Arafura Sea and Torres Strait between mainland Australia and New Guinea, and Bass Strait between mainland Australia and Tasmania. When sea levels were lower during the Pleistocene ice age, including the Last Glacial Maximum about 18,000 BC, they were connected by dry land. During the past 18,000 to 10,000 years, rising sea levels overflowed the lowlands and separated the continent into today’s low-lying arid to semi-arid mainland and the two mountainous islands of New Guinea and Tasmania.

With a total land area of 8.56 million square kilometres (3,310,000 sq mi), the Australian continent is the smallest, and second-lowest human inhabited (after Antarctica) continent on Earth. As the country of Australia is mostly on a single landmass, and comprises most of the continent, it is sometimes informally referred to as an island continent, surrounded by oceans.

Professor Iain Stewart uncovers the mysterious history of Australia, and shows how Australia's journey as a continent has affected everything

The Sky at Night – Alien Worlds